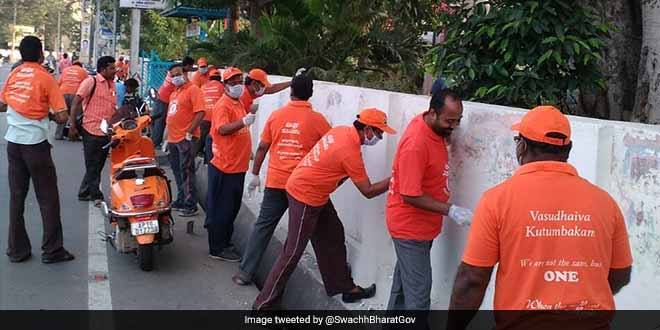 Increasing public awareness on the importance of maintaining cleanliness in urban spaces has been one of Swachh Bharat Abhiyan’s various objectives. In the course of the three years of the Abhiyan, cities have come up with various incentives to sensitise and inculcate among people the ideal methods of waste disposal and management. Many civic bodies have also awarded residents for maintaining cleanliness and Andhra Pradesh’s Vijayawada is joining the list. In a first, the Vijayawada Municipal Corporation (VMC) has announced the ‘Swachh Vijayawada Awards,’ which will see schools, hospitals and residential societies awarded for cleanliness and waste management.

The competition was announced by the municipal commissioner of Vijayawada ranked a very good 19 out of 434 cities in Swachh Survekshan 2017. But the resolve to come within the top 10 cities this year has prompted the city’s civic body to launch the awards as part of Swachh Survekshan 2018, so that citizens, schools and hospitals can participate in the cleanliness competition for better performance in this year’s rankings. The competition will also begin a healthy habit of practising proper waste management by the residents, which will be beneficial for the civic body in the longer run.

We ranked well in the 2017 edition of the Survekshan but are aiming for a better rank this time. Breaking into the top 10 will only be possible when residents of Vijayawada, as well as schools and hospitals come together to manage waste properly. That is why we are launching the awards before the Survekshan in 2018, said D Chandrasekhar, Additional Municipal Commissioner, Vijayawada.

The VMC has identified five categories which are eligible for participation in the awards. Hospitals, hotels, schools, residential welfare associations and market associations can participate in the contest. The civic body will take into consideration garbage disposal, green cover, clean walls, maintenance of toilets, installation of dustbins and availability of proper drainage facilities will be considered when municipal officers inspect participants. Teams from VMC will inspect the applicant’s areas and score them accordingly. Interested parties can submit their names for consideration, up to November 15 and the results will be declared by the end of November.

We have formed teams comprising our officials who will inspect the areas of the applicants and mark them. The rankings and score will be completely transparent and the method of scoring will be finalised before the last date of submitting applications, said Mr Chandrasekhar.

Apart from the Swachh Vijayawada awards, VMC will also begin a special drive to remove posters from the city, which have defaced public walls for quite some time now. The civic body will opt for wall paintings in some of the well-known spots in the city, the walls of which have been filled with posters. The civic body will associate with painters who will be given the duty of painting and sticking of posters will be heavily penalised.

Vijayawada’s Swachh Awards is indeed a unique idea which could be effective not just towards improving the city’s Swachh rankings, but also towards long term implementation of cleanliness goals. The effect on rankings will be visible once they are out, but the civic body’s taking up such an incentive to inculcate a sense of healthy competition on cleanliness is laudable.