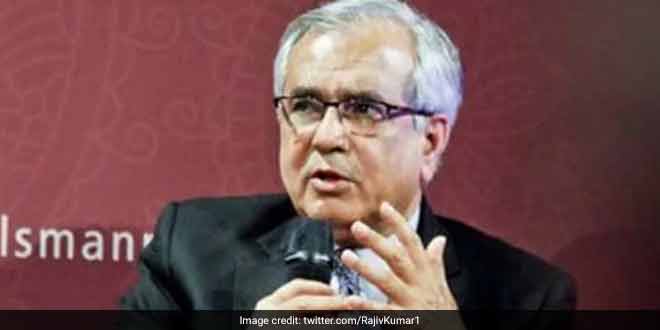 New Delhi: NITI Aayog said today that it is in discussions with the water resources ministry for establishing an authority to clean and rejuvenate the Yamuna river in the capital. Almost 60-70 per cent of the pollution in Yamuna comes from the Najafgarh drain alone and if that single drain could be handled, it is possible to enliven the river again, NITI Aayog Vice Chairman Rajiv Kumar said.

Speaking at the 3rd Kalam International Youth Conclave, he said: “We at NITI Aayog have decided to formulate/ establish Yamuna Water Management Authority. It is almost a dead river now and that is why I have been talking with Nitin Gadkari on this.”

Mr Gadkari, the Minister of Water Resources, is completely on-board with respect to establishing such an authority and project will start soon on this direction, Kumar said. Besides, he said, the government is planning to use the funds of Mahatma Gandhi National Rural Employment Guarantee Act scheme to desilt water bodies such as ponds in villages and in hinterlands to conserve water in a better way.

He said India needs to take a giant step in making its agriculture sector more water efficient than it is today and the effort should be towards shifting focus from conserving water in urban areas to conserving water in agriculture sector as it consumes a huge amount of water. Mr Kumar said the enormity of water crisis is not being recognised in India and technology can help find the solution to this problem.

Over the course of the last two weeks, the National Green Tribunal bench is hearing arguments related to the pollution in Yamuna. The Tribunal severely reprimanded Delhi Jal Board (DJB) for unable to begin work on 14 sewage treatment plants, the construction of which was supposed to be completed by March 2017. NGT directed DJB to ensure that construction of the STPs start within a month. The NGT also announced the formation of a committee which will submit an action plan on the river to the tribunal by September 2018.

Related Topics:
National Green Tribunal Yamuna Clean Up
Up Next

If Cigarette Packets Can Carry ‘Injurious To Health’ Warning, Then Why Not Polluted Ganga Water, Asks NGT