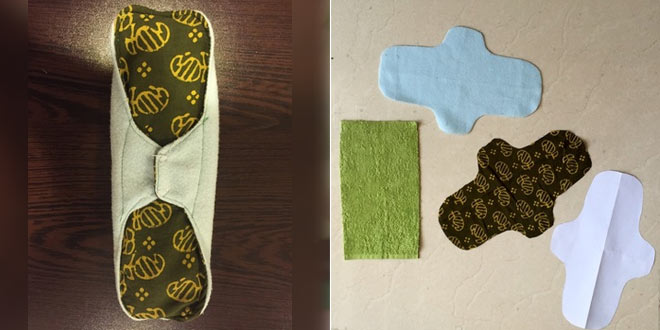 New Delhi: ‘In Class 9, when puberty hit me and I started using what most girls in India cannot afford – a normal sanitary napkin, I asked myself a simple question which most women in our country ignore – how am I supposed to disposed it of? I knew for sure, one the sanitary napkin is plastic-laden, secondly, plastic takes some 700 years to decompose completely. That’s when I started exploring alternative options which are more environment friendly,” says Dhanya Indraghanti, a class 12 student from Andhra Pradesh who gave up plastic sanitary napkins and instead sews pads with old cloth. She calls them – DIY Cloth Pads. In fact, she is so impressed with her decision of using homemade cloth pads that now she educates people on how to stich a perfect sanitary napkin for themselves and why they should follow her suit.

Dhanya’s mother made the first pad for her from an old cotton skirt. Dhanya explains,

“The soaking layers were cut out from an old pair of pyjamas, with a backing of velour (a knitted fabric).

When I used the first pad, I was simply impressed and since then I have never looked back at normal sanitary napkins. 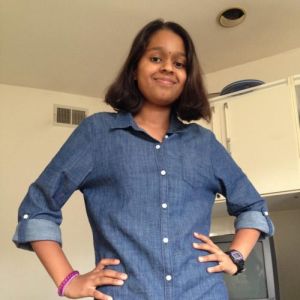 Explaining the benefits of using a cloth pad, Dhanya said, cloths pads are easy to make, they don’t require any skill, and they can be made both by hands or machine. Plus, by using them you can actually eliminate the risks of all kinds of bacteria or infections.

One just needs to be careful on how they wash and dry it. The cloth pad should be thoroughly washed with water and soap and should be dried out in the sun, said Dhanya.

“Get yourself some cloth, a needle and some thread, and you are sorted,” said Dhanya.

Step one involves drawing the template of a pad – ‘Once the template is set, use it to cut a piece of cloth,’ said Dhanya.

Going onto the next step, that requires a towel, “Make a strip from towel and put it in the middle. You can experiment with this, depending on the flow. Now, simply stitch the towel layer onto the front of the cotton piece,” added Dhanya.

Step 3 is to get the back layer, “It is great if you can get a velour fabric (knitted cloth), you can use it to cover the back of the pad, but the same piece of cloth can be utilised too,” added Dhanya.

“Last step is simply to stich the back and front together and voila, your homemade cotton pad is ready,” explained Dhanya.

Dhanya also suggested a quick tip for the users, she says, “It is advisable to do zigzag stitching when you are stitching your towel layer onto the front of the cotton piece. It helps keep the inner soaking layer from moving.”

Dhanya now is conducting workshops for girls in her school and in villages around and is educating people on why they should switch to cloth pads.

Speaking in numbers, more than 1 billion non-compostable sanitary pads every month ends up going into our country’s already dying landfills. And, this number is continuously increasing. This has prompted, Dhanya to give up on sanitary napkins and instead start using her own DIY cloth pads. Now, the need of the hour is to get more people involved, it is high time to start thinking of saving our own planet.

Dhanya signs off by saying,

In our country, one of the biggest movements today is Swachh Bharat Abhiyan, but, the dream of clean nation by 2019 will not be successful until unless everyone starts thinking of reducing their carbon footprint. If more people (students especially) can start doing what I have done, then we can surely make India a better place.