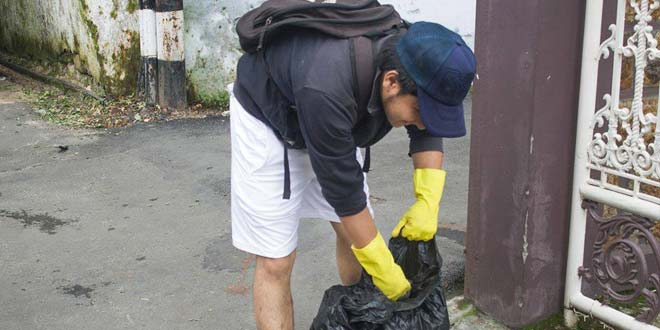 Throughout the ongoing Swachh Bharat Abhiyan, Prime Minister Narendra Modi has repeated the necessity of the movement becoming a participatory one. Unless ordinary people participate in keeping their surroundings clean, the goal of a clean India will forever remain a dream. The hill station of Shillong is known for its gorgeous scenic beauty but urban conglomeration has resulted in a steep rise in the number of buildings and people, the latter often having a disregard for the hill station’s once clean surroundings. The firm belief that much more could be done in terms of waste segregation has seen a 24-year-old in Shillong launching a campaign against littering.

While many prefer waiting for some kind of assistance from the administration, journalism student Nangjop Thabah took it upon himself to launch a campaign titled #NoLitterShillong. As the son of a school principal, Nangjop had always been interested in giving back to the community and contributing towards a cause. The task of cleaning roads and removing garbage may sound like too much for a pair of hands, but not for Nangjop. Casual disposal of garbage had become a regularity in his neighbourhood of Jaiaw Laitdom and without wasting any time, Nangjop on June 26 decided to start by cleaning his neighbourhood . He was accompanied by his young neighbor, a volunteer and his sister, who wanted to document this whole campaign of getting garbage off the streets without any administrative help.

I always felt the need to do something fruitful for the society and contribute in some way. I would often find garbage thrown here and there and wondered what could be done about it. Instead of just preaching about cleanliness, I thought that actually doing something would be more effective, said Nangjop Thabah.

Armed with only rubber gloves and disposable garbage bags, Nangjop and his companions picked up whatever garbage they could lay their eyes on, ranging from discarded food packets to glass bottles. But for Nangjop, disdain and questions kept following him when people saw him and his companions cleaning garbage off the streets. Questions, ranging from what he was doing to which scheme of the government was sponsoring his work poured in during his cleanup campaign. The nature of the questions surprised Thabah, as he never expected such questions to come up solely because someone took up an initiative for the community. 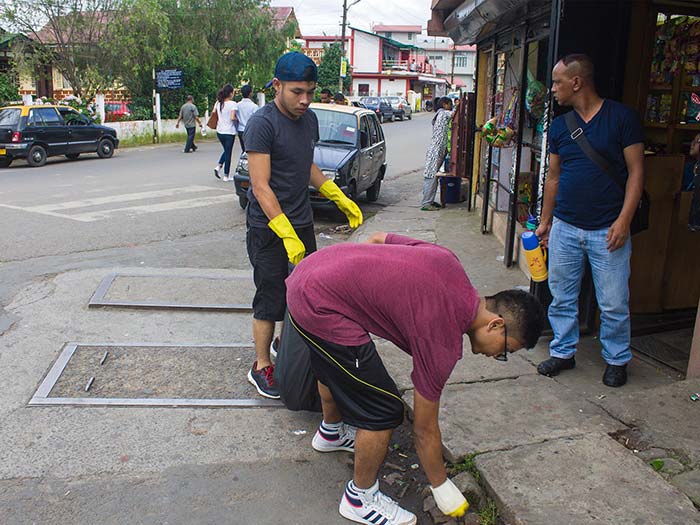 Nangjop’s first day of cleaning up litter from the streets

Nangjop says that Shillong is no longer as clean as it used to be as people have become habituated to throwing garbage inappropriately. This is why he wanted to begin a movement which would inspire people to take it upon themselves to clean the streets of Shillong all by themselves, without any external help. Nangjop decided to continue his campaign and posted photographs of his cleanup campaign, along with the hashtag #NoLitterShillong.

What followed were appreciation from numerous people, and as Nangjop’s original post was shared by over 300 people, he was also joined by more volunteers who wanted to clean the litter of Shillong’s streets. He founded support and appreciation among likeminded people.

The response to #NoLitterShillong was extraordinary all over the social media, as numerous people came forward to support the cause. With #AdoptaNeighbourhood, I want people to take small steps towards ensuring the cleanliness of a particular area. When people gradually start participating in such a campaign, it is bound to become successful, says Mr Thabah.

Nangjop has been instrumental in taking his cleanup drive to some of Shillong’s busiest areas such as Police Bazaar and Nohwet village, and has found a considerable number of volunteers. His hashtag has caught the attention of many on Facebook, who are using it to post images of similar cleanup drives conducted at various locations across Shillong. Within a week, several posts have flooded Nangjop’s timeline, with images of people cleaning litter from various parts of the hill station. 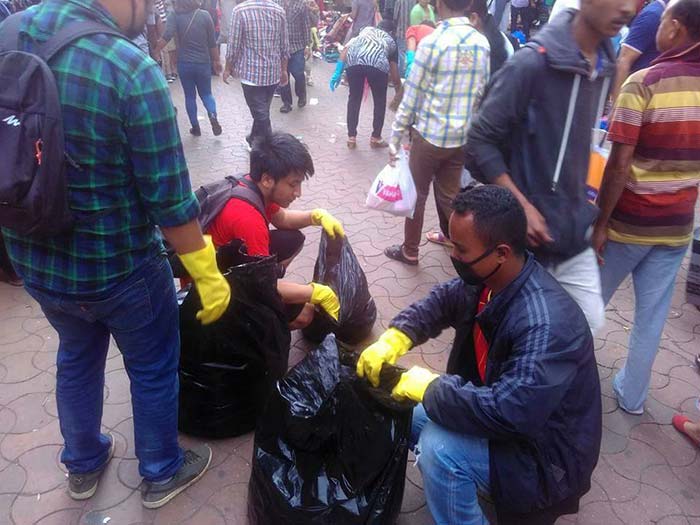 A clean up drive at Shillong’s busy Police Bazaar

I hope that people’s participation in the campaign will help in its sustenance. I am not looking at any municipal or government support at the moment as I want people to bring in the change themselves. The response to what I had begun has been great and hopefully, will continue as people of Shillong come together to keep their beloved city clean, said Mr Thabah.

Nangjop’s campaign shows belief in the self and in people when it comes to cleaning litter off the streets. We only have to take a few steps forward and involve ourselves in activities which, however minute, will contribute towards the nationwide movement of cleanliness.