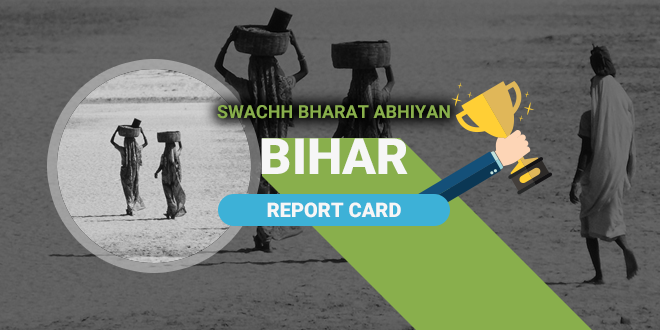 New Delhi: The basic amenities of toilets and clean drinking water were considered luxuries in several parts of India even three years back, when the country had sanitation coverage of mere 38.70 per cent till 2014. With the launch of the Swachh Bharat Abhiyan, the sanitation scenario has improved across many of states as more than 4.75 crore toilets have been built and sanitation coverage increased to 68.21%. The improvement unfortunately, is not equal across all states as some have fared better than others and a few haven’t been able to make any major strides despite the mission nearing the three year landmark. Bihar remains the worst performer among India’s states. The state’s sanitation coverage has improved only marginally to 32.35 per cent from 22.34 per cent in 2014.

A total of little over 21 lakh (21,70,800) household toilets have been built in rural Bihar which has 18 million households and accounts for 89 per cent of the state’s population. No district in the state is open defecation free yet. Despite sanitation being on the list of priorities of the state government, the miserable performance of the state, that too when the campaign has crossed its halfway stage is a cause for serious concern. Urban sanitation in Bihar has not fared very well either as it lags at 20 per cent urban sanitation coverage, with none of its major cities achieving the open defecation free (ODF) tag yet. Of 6.4 crore households that still require toilets in India, Bihar’s share is a staggering 22 per cent, or roughly 1.4 crore.

So where is Bihar missing out in implementation of Swachh Bharat Abhiyan? Dr Ashok Kumar, State Coordinator for Swachh Bharat Abhiyan (Bihar) states that the lack of awareness creating activities and lacklustre attitude of district administrations has hurt Bihar for almost two years in implementing the mission’s objectives. Dr Kumar’s statements are reflected in the fact that against 8 per cent of total Central funds allocated for information and communication activities, Bihar had utilised only 0.18 per cent, in three years. With low awareness among people and even lower enthusiasm among district officials, toilet building was ever prioritised in the state. 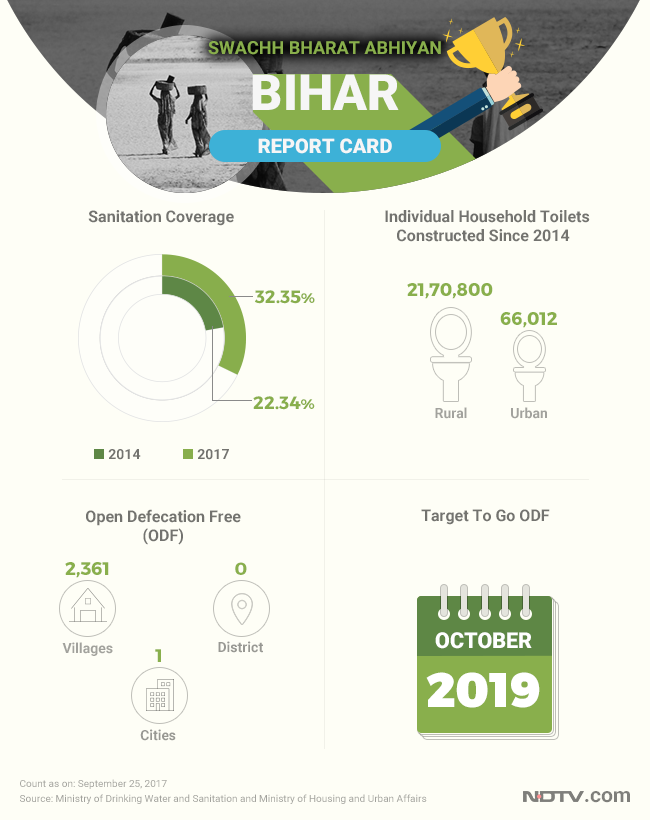 Even in the darkest of clouds, silver linings are found and some examples in Bihar show signs of hope in the otherwise glum sanitation scenario. Khagaria, the first gram panchayat in Bihar to become ODF used Community Led Total Sanitation (CLTS) where women from the village took the initiative to build toilets and get the open defecation free (ODF) status. In July this year, the tale of Phool Kumari from Barahkhanna village in Sanjhauli came to light. She mortgaged her jewellery to build a toilet in her household. Phool Kumari has now been made the district ambassador for the Swachh Bharat Abhiyan. In January 2017 Chief Minister Nitish Kumar announced that incentives and rewards would be given to districts which attain the ODF status. Under the Namami Gange programme, 788 of 795 villages in Bihar which are situated near the banks of river Ganga have become ODF, a considerable achievement for the state.

The fact however remains that toilet construction in Bihar needs to be speeded up if the state is to meet its October 2, 2019 target of becoming ODF. The Rural Development Department is aiming to make at least 9 out 10 of northern Bihar’s districts ODF by March 2018, currently all of them have sanitation coverage below 30 per cent. The rest of the state’s villages, cities and towns must increase the pace of toilet construction and focus equally in engaging in communication with people to make them aware about the necessities of safe sanitation and functioning toilets, failing to do which will keep Bihar out of the ODF race.

Kerala On Its Way To Go 100% Swachh: First The State Tackled Open Defecation Effectively And Now It Aims To Go Waste Free

With Commendable Progress In Both Urban & Rural Sanitation, Chhattisgarh On Its Way To Be Open Defecation Free