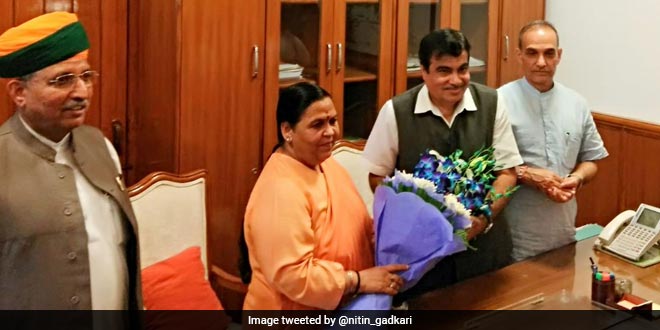 New Delhi: Faced with the herculean task of fulfilling the government’s promise of cleaning the Ganga, the Centre needed nothing short of a silver bullet to meet the deadline for the project, which some allege, is being implemented at a snail’s pace. This sluggish implementation is ostensible reason behind Transport Minister Nitin Gadkari, considered one of the top-performing ministers, getting the additional charge of water resources ministry, sources say. The ministry is tasked with the responsibility of executing the Namami Gange project, dear to Prime Minister Narendra Modi. Nitin Gadkari replaces Uma Bharti, who has now been given the charge of Drinking Water and Sanitation, in the rejigged Cabinet. Also, two junior ministers in the water resources ministry – Vijay Goel and Sanjiv Kumar Balyan – have been replaced by Satyapal Singh and Arjun Ram Meghwal.

The Centre has set a target of 2018 for cleaning the mighty river, which touches lives of millions of Indians in one way or the other. According to sources in the water resources ministry, a total of 160 projects, worth around Rs 12,500 crore, have been approved under the Namami Gange Mission – a Rs 20,000 crore project for cleaning the river.

These include developing river fronts, setting up sewage treatment plants and construction of ghats and crematoria, among others. Till now, only 40 projects have been completed, the sources said. The BJP coming to power in Uttarakhand and Uttar Pradesh, two of the five key Ganga-basin states, in March did not help the project gain the expected momentum, they added. Bihar, West Bengal and Jharkhand are other three Ganga-basin states. In Bihar, the BJP returned to power only towards the end of July.

Also Read: New Law On Ganga Cleanup In Progress, Will Be Shared With The States: Uma Bharti

“The reason offered until six months ago (i.e, prior to UP and Uttarakhand assembly polls) that barring Jharkhand the remaining four states had non-BJP governments, too, seems specious,” a source in the water resources ministry said, requesting anonymity.

“Because, even though the BJP came to power in Uttar Pradesh and Uttarakhand, things haven’t changed much. This could be the reason that there is a change in guard in the ministry as the deadline pressure mounts,” the source added. Gadkari has been associated with the Namami Gange Mission in his capacity as the Transport & Shipping Minister to develop waterways in the 2,525-km river. Sources said this might have worked in his favour.

“Since he is aware of the project in some or the other way, he may not eat into much of the crucial time left to understand the project’s nitty-gritty. In addition to this, he is considered as a go-getter, a minister who prefers to hear answers from officers only in either ‘yes or no’,” the sources added. Apart from Namami Gange, the Water Resources Ministry is implementing the key Ken-Betwa river-linking project, first project aimed at connecting two rivers to meet water needs of drought-prone swathes of the Bundelkhand region, which falls in both Uttar Pradesh and Madhya Pradesh.

The project, too, has been delayed due to environmental clearance issues and also as the BJP government in Madhya Pradesh refused to give its approval for implementing the project. The Pradhan Mantri Krishi Sinchayi Yojana, an ambitious irrigation programme, is another scheme the ministry is executing.