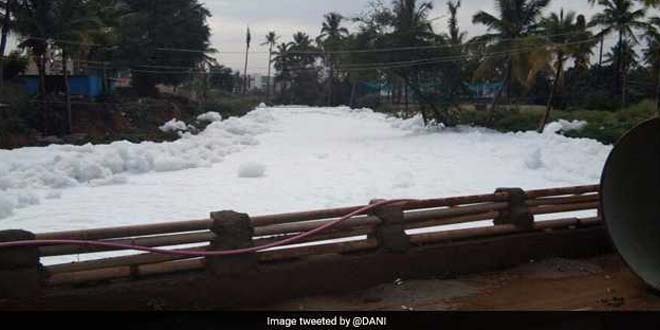 Some places never run out of their habit to stay in the news. Bengaluru’s well known Bellandur lake is one such water body, which has been consistently in news for the past few months, for all the wrong reasons. The lake, which is a regular dump yard for untreated industrial sewage receives pollutants of all kind from industries and households. Years of this practice has resulted in Bellandur becoming an amalgamation of toxic pollutants, which transform into  froth and often overflow into the city. On August 15, heavy rains in Bengaluru which were the highest received by the city in a century restarted the cycle of froth coming out of the lake and paralysing normal life.

The rains received by Bengaluru on the night of August 14 were reportedly the worst since 1890 and flooded homes and roads, and many places were in knee deep water. The rains also resulted in the comeback of dirty and foul-smelling toxic froth from the lake. The heavy rains on August 14 and 15 resulted in the increase of the lake’s water levels and the formation of thick, toxic froth. Many commuters were unable to drive around the lake area due to the intensity of the froth flowing around.

The downpour on Tuesday lasted for only three hours but the rains were so heavy that even the storm drains could not take the load. This resulted in the lake’s water levels increasing and formation of froth, said Manjunath Prasad, Commissioner, Bruhat Bengaluru Mahanagara Palike.

The problem of toxic froth from the lake keeps on rising and has reached literally high levels, going up to two storeys high  on this occasion. The intensity of toxic froth on this occasion has been high enough to cover entire cars, disrupting commuting for travellers. Residents are forced to stay indoors, fearing infection due to the poisonous nature of the froth. The sad state of the 1000-acre lake is a result of apathy on behalf of the authorities and failure to comply with necessary orders from the National Green Tribunal (NGT).

This is the fourth time this year that the Bellandur lake is in news due to frothing and catching of fire in the lake. Following the NGT’s order in April 2017, the Bangalore Development Authority had begun clearing the lake of weeds, which made the lake prone to fire and was supposed to complete the task by the end of May. But the excessive levels of weeds in the lake, along with the magnanimity of the lake area have resulted in continuous delays in fulfillment of the task, which is still continuing. The heavy rains this week have ensured further delay in the task.

We have deployed high-power pumps and installed coir foam mattresses to stop the lake from frothing and clean out the weeds in the process. The intensity of the recent rains however, was too much for even our efforts to match. We are hopeful of cleaning the weeds from the lake’s surface very soon, said a Bangalore Development Authority official.

Toxic sewage continues to be dumped in the lake despite the NGT’s order of immediate closure of 76 industries near the Bellandur lake area. The lack of a sewage treatment plant near the lake has resulted in free flow of untreated sewage into Bellandur. The size of the lake, amount of toxic waste in it and occasional hurdles like the recent rains have only aggravated the problem of Bellandur, with no immediate solution, as of now. In March 2017, experts from Britain and Israel visited the lake to provide potential solutions to tackle the lake’s pollution before the situation became irreparable and went out of hand. Their suggestions of treating the incoming wastewater and getting rid of the accumulated weed deposit in the lake are yet to be effectively implemented, as seen from the recent frothing incident.

The Karnataka Chief Minister Siddaramaiah stated that it will take a minimum of one or two years to clean up Bengaluru’s polluted lakes. The Chief Minister had given a less optimistic response in May this year, when he stated that the frothing of the lake happened every year and was not something new. While the timeline of one or two years is understandable considering the status of Bengaluru’s lakes, the lack of proper planning and coordination between the concerned authorities and the inability to flush out weeds from Bellandur lake despite crossing three months of the scheduled deadline will not help the city’s authorities in their cleanup efforts.