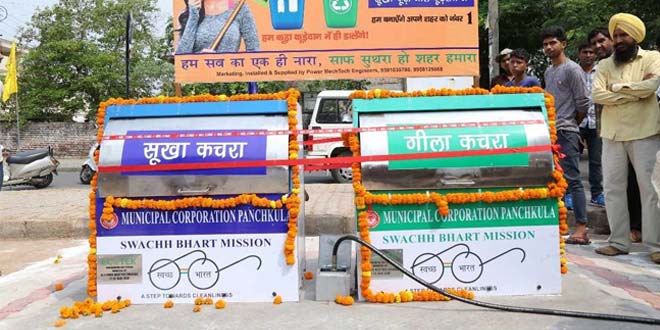 Mumbai: Optimise the use of technology – seems to be the latest mantra adopted in Panchkula, popularly known as the city of five canals, to up the overall sanitation quotient. Addressing the two most fundamental aspects of Swachh Bharat Abhiyan – waste management and toilet usage, the Panchkula Municipal Corporation (PMC) installed four underground garbage bins and listed the public toilets on Google Maps in the beginning of this month.  While the unique bins will take care of the waste disposal problems in commercial areas, the geotagging will help citizens to find the nearest public toilet. And therefore people can be discourage to defecate openly.

Last year, on Mahatma Gandhi’s birth anniversary on October 2, the city with a population of 5.60 lakh accomplished the task of providing toilet access to every resident and in turn received the title of open defecation free (ODF). The PMC, has since then, taken multiple steps to not only retain the ODF tag but also to try to enter the league of ODF plus regions by working towards building an efficient waste management system in the city. And the two latest initiatives reiterate city’s Swachhta goals.

Of the total four bins, one bin was inaugurated on May 3 in city’s market area situated in sector 15. The rest of the bins will be functional in the second week of May. The bins have a capacity of 1,100 litres and each of them cost upto Rs 9 lakh. The bin is further compartmentalised for keeping dry waste and wet waste separately. Everyday, the bins will be emptied by the PMC hydraulic van to keep the city dirt free. 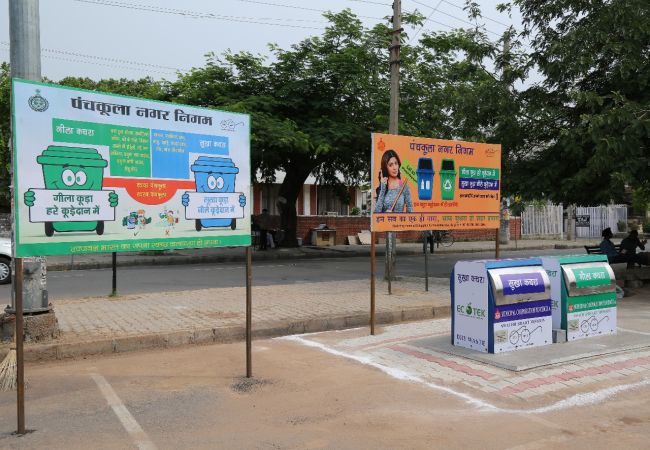 The underground bins have several features which include:

This is the first time, Panchkula has introduced underground bins with an aim to eliminate the problem of littering and overflowing dutbins. The concept of underground bins has been developed under our mission to make the city garbage-free.

She further highlights the condition of waste problems and says,

Reaching the goal of 100 per cent source segregation is a mammoth task for us, as unlike other cities, Panchkula lacks a scientific landfill and a proper waste treatment plant. In addition to that, the citizens have not yet started waste segregation in most parts of the city which has further intensified our garbage problems.

The success of the underground bins is extremely crucial for PMC as it is through these bins that they hope to convince people in segregating their waste.

This pilot project will serve as pillars of city’s waste management system. We can convince people to adopt this new technology in their residential premises as well and practice waste segregation, she adds.

Of the total 20 wards, public and community toilets in six wards have been geotagged. In other words, it means that anyone can now locate a public toilet at malls, market areas, parks, community centres and government offices by simply typing ‘Swachh Public Toilet’ on Google Maps. Besides locating the toilet, the map will also provide details about the toilet like its photo, timings and will let the user review the toilet.

Also Read: Not Happy With The Swachh Quotient Of Toilets In Panchkula? Here Is What You Can Do

The corporation hopes to finish mapping all the 145 public and community toilets in the city by end of this month.  The move to map toilets has been taken ahead of Quality Council of India’s verification visit this month. Though the certificate of ODF was issued last October, it is mandatory for the QCI to check the ODF status every six months.

Retaining the ODF status is a challenging task as people continue to defecate in open despite having toilet access. Geo-tagging toilets will provide information of toilets on-the-go thereby preventing them from defecating in the open, says Ms Chauhan.

Apart from mapping of toilets, the corporation has installed a feedback system outside every public and community toilet. A user can rate the toilet in terms of cleanliness and hygiene based on his/her experience. Treating open defecation as a punishment, the corporation has also imposed a penalty of Rs 500 on violators along with implementing the policy of ‘Naming and Shaming’ the perpetrator.

In Swachh Survekshan 2017, Panchkula was ranked 211, which came as a shock and a wakeup call for the administration and the people. The ranking reminded the city of its status of a poor sanitised and hygienic society.  In last one year, the PMC has undertook several initiatives and awareness campaigns with a desire to not only perform better in the cleanliness survey of 2018 but also get a spot among top 50 clean cities, points out Ms Chauhan.

To Fight Open Defecation In Her Village, 87-Year-Old Woman From Jammu And Kashmir Is Building A Toilet All By Herself