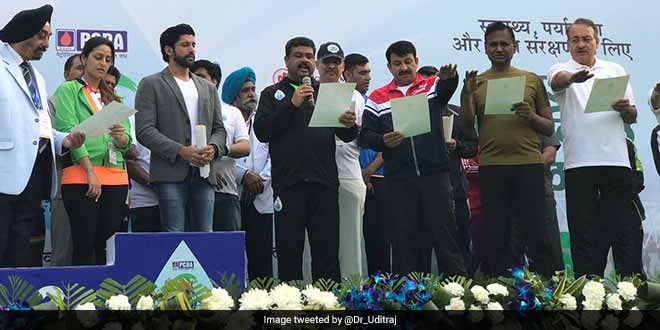 New Delhi: Nearly 5,000 people, including actor Farhan Akhtar and officials from various ministries, geared up in their cycles, to take part in a cyclothon in New Delhi’s Jawaharlal Nehru Stadium on Sunday in order to pledge their support for a Cleaner India. Touted as an environment-friendly affair, the event was held to create awareness on ‘green rides’ through cycles and guide people on how they can help reduce the ongoing air pollution crisis in the country. Titled as “Saksham Pedal Delhi”, the event was organised by Petroleum Conversation Research Association in association with the Cycling Federation of India.

The genesis of the cyclothon lay in Prime Minister Narendra Modi’s appeal in his monthly radio show Mann Ki Baat, where he urged people not to use diesel or petrol once a week, instead start cycling for smaller distances as their action will help contribute in building a cleaner and healthier nation.

Present at the event, actor Farhan Akhtar said, “This is the great start for a cleaner and fitter India.”

While Union Minister Dharmendra Pradhan added, “Cycling can be such a fun. Thoroughly enjoyed it. ”

Sharing a few more glimpses of Green Ride. Cycling can be such a fun. Thoroughly enjoyed it. pic.twitter.com/JbgizN2AB2

He also introduced a warrior from the event and said, meet Amreshwar Gadnayak from a small village in Odisha, he has cycled upto Wagha Border & Bhutan-Nepal Border carrying one board that reads – Save The Environment, simply to motivate people to do their bit for conserving the planet.

Organisers of the event say that the event aims to create awareness about finding a solution to the city’s air pollution. Speaking about the toxic air in the city, Delhi’s Air Quality Index (AQI) levels were at 316 on November 3, indicating hazardous levels of air pollution. The average AQI of Delhi remains at 300, whereas the safe limit for AQI is 0-50.