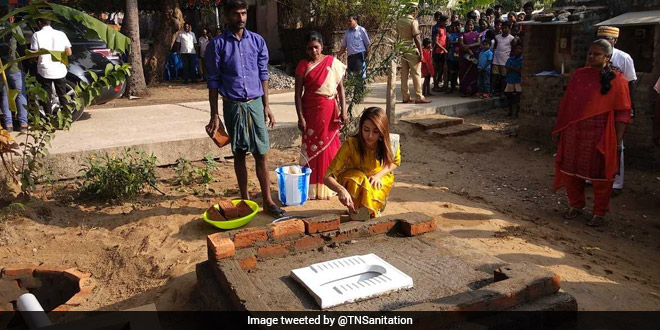 New Delhi: Trisha Krishnan, an Indian film actor and United Nations Childrens’ Fund (UNICEF) Celebrity Advocate visited Vadanemmeli, an interior village in Kancheepuram district on December 29 to promote the usage of toilet and make people aware about the health benefits of using a toilet. She met the residents of various villages in neighbouring Kancheepuram district and encouraged setting up of toilets in their localities. Not only this, the actor also participated in a toilet construction activity and helped the villagers construct a ‘leach pit toilet with two pits’.

Stating the benefits of a toilet with twin pit, Trisha said,

A toilet with twin pit is a win-win model. It is cheaper, environmentally friendly and a more sustainable solution for building toilets in villages.

Leach pit toilet with two pits can be constructed in two-three days and are less expensive and easy to maintain, a press release said. The toilets are environment friendly and need only two-three litres of water for flushing.

According to UNICEF Chief for Tamil Nadu and Kerala, Job Zachariah, a family using a toilet can save over Rs. 50,000 per year on account of medical costs and time, as per an UNICEF study conducted in the country in 2017.

Sharing the pics from the event, UNICEF tweeted

Women and girls face shame, loss of personal dignity and risk their safety when there is not toilet at home. They have to wait for nightfall to relieve themselves in privacy. It is a gross violation of Human Rights.

Talking about the noble deed, Trisha tweeted a picture of her sitting with women from Vadanemmeli and captioned it as “I am proud to be an Indian woman and sit amidst these superwomen.”

Last year, in November, Trisha joined Amitabh Bachchan, Aishwarya Rai, Priyanka Chopra, Sachin Tendulkar to become another celebrity advocate at UNICEF. Since then she has been advocating towards some or the other cause, like, child marriage.

Have a look at Trisha building a toilet