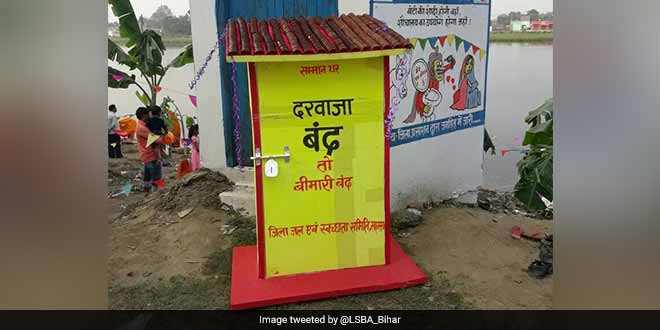 In Bihar’s Vaishali district, the block of Lalganj had been preparing for Chhath festivities for the last two weeks. The biggest festival of Bihar happened barely a week after Diwali, but there was no dearth in the preparation or grandeur with which Chhath was celebrated all across the state. Like all other districts in Bihar, Vaishali too had been gearing up for Chhath celebrations, held from October 24 to 27. The Vaishali district administration utilised the festive occasion to propagate Swachh Bharat Abhiyan’s primary objective – that of building toilets.

This Chhath Puja witnessed 784 youngsters from Vaishali district gifting toilets to their families. Over the course of the four day celebration, these toilets were handed over to mothers from the respective 784 families, who had been forced to relieve themselves in the open till now. The district administration had been working towards the toilet gifting plan a month in advance and wanted the festive occasion to be more special for numerous women who never had access to a household toilet.

The festive occasion is always used to exchange gifts and there is a general mood of happiness all around. We decided that this year, Chhath could be used to gift toilets instead of any other traditional gifts. Given how the Swachh Bharat campaign has become an integral part of districts across the country, we decided to see how we can weave the campaign with the festive spirit, said Rachana Patil, District Magistrate, Vaishali.

Also Read: Bihar’s Sanitation Scenario In Tatters As Toilet Coverage Is At 32.35% Despite 3 Years Of Swachh Bharat Abhiyan

Realising the district’s severe sanitation issues, the district administration started phasing out toilet construction activities to slowly move towards the goal of open defecation free (ODF). From earlier this year, the administration has held community led total sanitation (CLTS) campaigns in many villages in the district, educating large gatherings about the importance of having toilets at homes and how the Swachh Bharat Abhiyan would provide an amount of Rs 12,000 for constructing an individual household toilet (IHHL). It was during such CLTS meets that the district administration came up with the idea of using Chhath Puja for gifting toilets.

Efforts to step up the district’s sanitation coverage have only gathered speed in the last one year. Many were unaware of the policies of the Swachh Bharat Abhiyan and what the mission intends. The decision to do something special during Chhath was taken to use the festive occasion and give the gift giving tradition a Swachh makeover, said Mrs Patil.

The toilets have been branded as ‘Izzat Ghars’ as they aim to end years of indignity women have faced because of defecating in the open. The District Magistrate has also assigned specific targets to block development officers and village development officers to ensure that more youngsters come forward in similar campaigns, where they decide to gift a toilet to their mothers. The district administration has also promised that youngsters gifting toilets will be rewarded with certificates.

Apart from Chhath Puja, in the recent past Rakhi, Bhai Dooj and Karva Chauth have also been used by many district administrations to run ‘gift a toilet’ campaigns. Such initiatives help to cash in on festivals, drive home the message and give a Swachh spin to the celebrations.

This Diwali Emissions From Fireworks Fell By Around 40%: Study