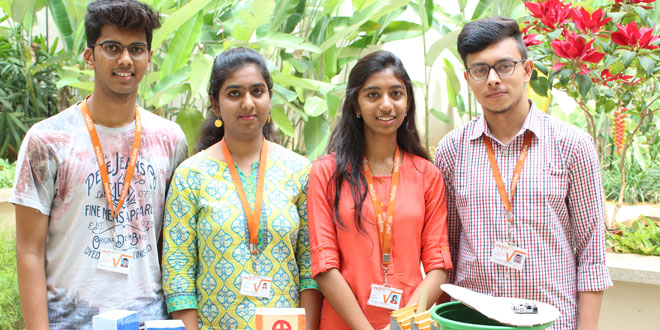 Mumbai: Garbage spilling along the roads, animals digging into the piled-up garbage and persistent foul smell have unfortunately become a characteristic in urban spaces of India. Even though Swachh Bharat Abhiyan is in its fourth year and the government is emphasising on waste management, littering issues continue to plague most of the cities. Seeing this poor state of affairs in Bengaluru, four college students have come up with a smart bin model that can altogether curb the litter menace. The path breaking model was developed in a product development project in MVJ College of Engineering.

It is always interesting to witness students coming up with innovative projects by applying science and technology and invent a device like Smart Bin to manage the generated waste. Waste management is the most important task in many metropolitan cities today and a smart bin like this would be of a great use. We need to appreciate the efforts of the students here, who witnessed the current waste management situation in the city and worked towards providing some quality product, says Ms. Brindha, Vice Principal, MVJ College of Engineering, Bengaluru.

Four students – Megha S, Nikitha S, Saivenket Pato and Suvra Pratim Roy have devised a smart bin model that uses Internet of Things (IoT) interface. The smart bin has to be connected to an App which has also been developed by the team. Whenever a bin gets full, a notification is sent to the driver or the one who manages that particular bin. This notification will act as an alert point for the driver to come and empty the bin, thus preventing the garbage from overflowing. 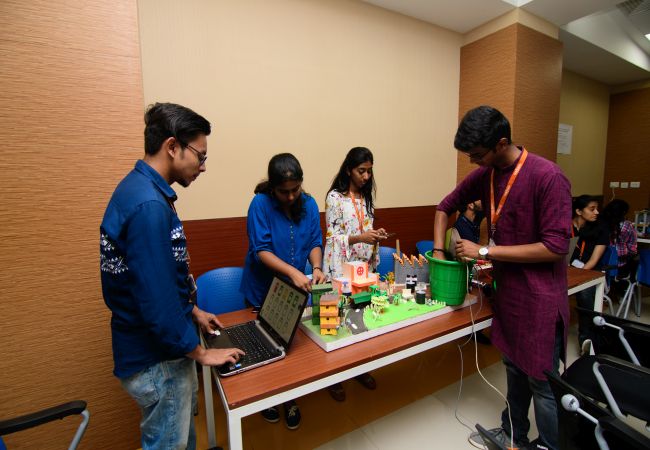 Being engineering students, we had to develop an app or a consumer-friendly product that would ease any work or a service. We wanted to design something that would solve a very basic but a fundamental problem. Managing waste is certainly a challenge in India considering the lack of civic sense and infrastructure. Thus, we collectively came up with the idea of a smart bin, says 20-year-old Saivenket.

The team has designed two separate apps, one for the truck drivers/owners of the bins/municipal body in-charge of public bins in the city and another for household bins. Bins in both the cases will be equipped with load sensor, ultrasonic sensor, humidity sensor and a ESp8266 model.

While the load and ultrasonic sensors in the bins will give the data related to the dustbin’s filling capacity, the humidity sensor will provide details about the humidity of the dustbin. The smart bins are designed in such a way that the lids of the dustbins seal automatically after the garbage has reached a certain level. The specific IP address of the ESP8266 will send the location of the dustbin, leading to a quick action.

Also Read: Want To Lead A Zero Waste Lifestyle? A 36-Year-Old From Hyderabad Shows How To Cut Down On Garbage

As for the App, it has a service feature on which a user can place a request to pick up garbage from bulk waste generators like restaurants. It also gives the user of the bin the accessibility to call the driver. The app also has an emergency feature which a user can avail of in case of emergencies like a breakdown. Users can also use the breakdown assistance in case of a breakdown and another driver will be arranged to do the pickup.

“Using our system will increase the efficiency of collecting waste and its disposal. Drivers will save a lot of fuel and time. And last but not the least the waste gets the proper treatment that it deserves,” says Saivenket.

The app and the smart bin, on which the team has been working on since last year, are currently in the prototype phase. The team is looking for investors and app developers who can help scale up the project. Once the app is in the functioning stage, the team will approach the Bruhat Bengaluru Mahanagar Palike (BBMP) to take on the garbage woes of the city.

Also Read: Struggling To Find The Nearest Dustbin? A 16-Year-Old From Mumbai Has A Wonder App To Make Waste Disposal Easy

Eco-Friendly Alternatives To Plastic: This Bengaluru Duo Gives A Green Spin To Shopping And Eating

To Fight Plastic Pollution And Its Health Hazards, This Delhi Based Entrepreneur Ventures Into Making Eco-friendly Tableware