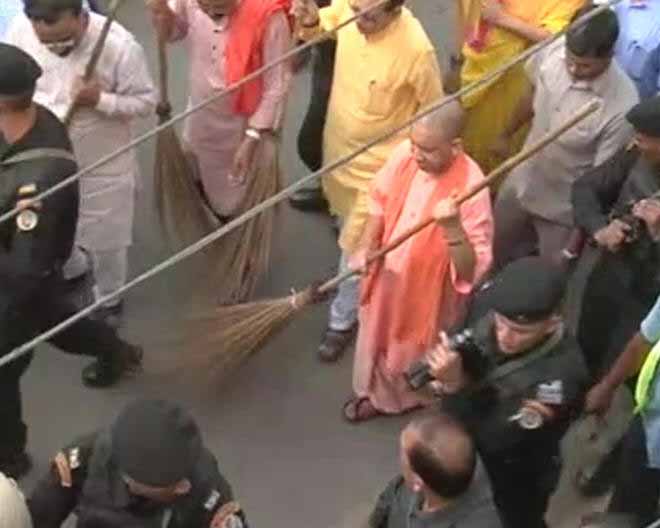 LUCKNOW: After the Swachh Bharat survey revealed that India’s most populous state Uttar Pradesh is also the filthiest, Chief Minister Yogi Adityanath decided to take the matter into his own hands, literally. Armed with a broom, the Chief Minister headed to a congested pocket of Lucknow and swept the streets along with his ministers.

He chose Saturday, a holiday for most, to kick-start the cleanliness drive in the state and to encourage the citizens to participate in Prime Minister Narendra Modi’s Swachh Bharat Abhiyaan and keep their cities clean.

The state got rather unflattering numbers on all cleanliness parameters in the nationwide cleanliness survey, Swachch Survekshan-2017, by the urban development ministry. Gonda turned out to be the dirtiest. Except for the holy city of Varanasi, PM Modi’s parliamentary constituency which ranked 32, no other UP city made it to the top 100. Fifty of the 62 of its cities that were surveyed ranked below 300.

Yogi Adityanath, Senior Cabinet Minister Suresh Khanna and others started at 7 in the morning. A busy road in Balu Adda colony in central Lucknow was their first stop. They were accompanied by 50 municipal workers in this initiative. 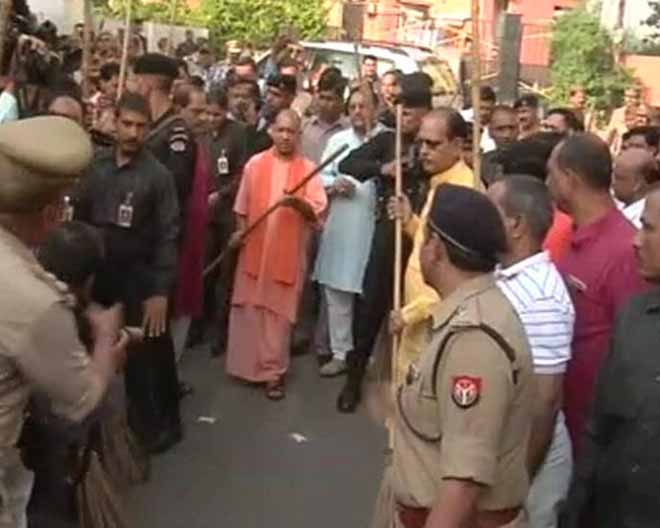 A busy road in Balu Adda colony in central Lucknow was Yogi Adityanath and his group’s first stop.

Soon after taking charge of the state, the 44-year-old chief minister administered a pledge of cleanliness to officials and asked them to clean up their neighbourhoods and commit 100 hours every year to the cause. The head of the state has resolved to change the face of Uttar Pradesh.

“We will ensure that cleanliness is maintained across the state. We will also focus on making Uttar Pradesh open defecation free. We are confident that we will be able to achieve that in the next few years,” Yogi Adityanath said yesterday during a press conference.

Most people were excited to have Yogi Adityanath in their city and promised to make their contribution towards cleanliness. Poonam and Dinesh, who have been running a Sulabh Shauchalaya or a community toilet in the locality for three decades, were happy to meet their chief minister. “He is doing a good job. His gesture will surely inspire others,” said Poonam.

But others like Kamal, a 26-year-old contractual municipal employee, didn’t seem convinced. He said, “The chief minister will do it for one day and go. People will forget about it. People need to be educated about the importance of maintaining hygiene. Every day I sweep the road and within minutes people start littering, spitting here. How does one change their mindset?”

In the next few days, government officials across the state will be expected to spend more time cleaning areas under their jurisdiction.

Swachh Bharat Abhiyan: Sanitation In Rural Madurai Has Jumped From 30% To 100%