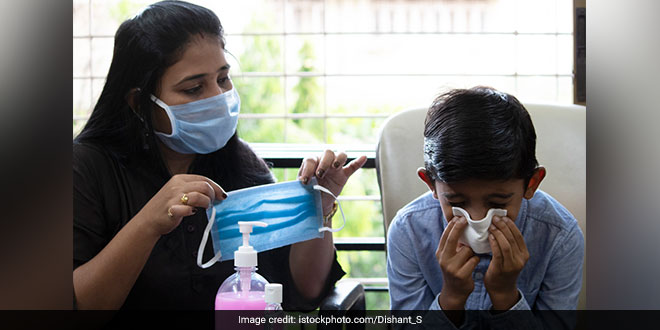 New Delhi: Dismissing assumptions that children and the younger population were more affected in the second wave of Covid, the government on Tuesday (June 15) said those in the 1-20 age group accounted for less than 12 per cent of the cases recorded during both the waves. Those aged 1-20 years accounted for 11.62 per cent of the total cases during the second wave (March 15 to May 25) as against 11.31 per cent in the first wave (July 1 to December 31), indicating not much difference in the proportion of those infected in this age-group, according to the data shared by the government at a press conference.

Presenting age bifurcation of cases in first and second waves, Lav Agarwal, Joint Secretary in the Health Ministry, said the first wave saw 3.28 per cent cases coming from 1 to 10 years age group while it is 3.05 per cent in the second wave. The age group 11-20 years accounted for 8.03 per cent in the first wave and 8.57 per cent in the second wave. Amid fears about the possibility of children getting more affected if a third wave comes, the government said there appears to be no substantial evidence to indicate there will be severe infection among them but then highlighted that people of all age groups need to stay vigilant and follow precautions.

Highlighting the improvement in the Covid situation in the country, Mr Agarwal further said that almost 85 per cent decline in daily new cases has been noted since the highest reported peak on May 7 and the number of districts reporting more than 100 daily cases have reduced from 531 as recorded in the week ending May 4 to 165 in the week ending June 13. There has been a decline of 75.6 per cent from the peak of Covid active cases recorded on May 10 across the county.

At present, there are 20 states and union territories where the Covid active caseload is less than 5,000 and a drastic reduction is being noted in almost all states. Due to the restriction being imposed at the field level in terms of containment activities, a sharp decline of 78 per cent has been noted since the highest reported weekly Covid case positivity of 21.4 per cent recorded between May 4-10 during the second wave.

Most Drugs For Treating Adult COVID Patients Not Recommended For Kids: Government Guidelines