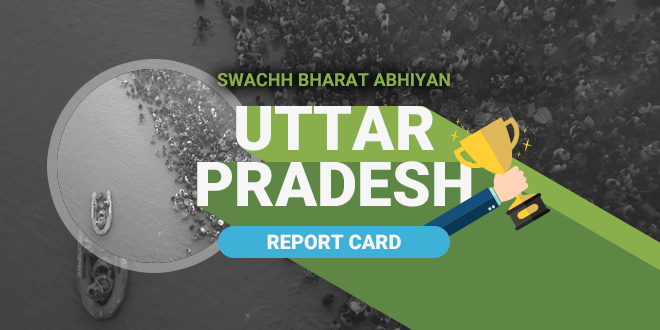 New Delhi: Uttar Pradesh, India’s most populous state is also the filthiest with the most number (25) of dirty cities including ‘Gonda’ which bagged the title of ‘dirtiest city’, in the Swachh Survekshan 2017. Except Varanasi, PM Modi’s parliamentary constituency that ranked 32, no other UP city made it to the top 100. The state with population of over 20 crore has rural sanitation coverage of just over 50 percent (51.63%). UP faring quite poorly on the sanitation and cleanliness front even prompted the then Minister of Urban Development M Venkaiah Naidu to say, “It’s a matter of concern”. Despite this grim situation, the 44-year-old Chief Minister Yogi Adityanath has set an ambitious deadline of October 2018 to make the state, including its 59,000 gram panchayats and around 1 lakh villages, open defecation free (ODF). To achieve this target, around 1.5 crore toilets need to be constructed in a year at the rate of 44,000 toilets per day in the state, where 41 lakh (41,14,611) got built ever since the inception of Swachh Bharat Abhiyan. But will the deadline end the state’s sanitation woes? Chief Minister Yogi Adityanath recently said that 15,000 toilets got constructed per day in the last six months to make the state ODF. Notably, the wachhcenario is no different when it comes to urban areas of the state – 25 of Uttar Pradesh’s cities were featured in the bottom 50 of Swachh Survekshan 2017. Additionally, a look at the number of toilets built in the last three years highlights the state’s painfully slow progress. At the time of writing this story, of the over 25 lakh applications received for the construction of the individual household toilets, only 1,71,950 have been constructed so far, states the Ministry of Urban Development’s Swachh Bharat Urban dashboard. Merely five cities in this demographically big state have been declared open defecation free so far. However, there is one city that seems to be doing well, the holy city Varanasi, which ranked 32nd in the Swachh Survekshan 2017, jumping from 418th place in 2014. So far, 7,274 toilets of the 17,742 applications received have been constructed in the city along with 503 community toilets and 1,169 public toilets. 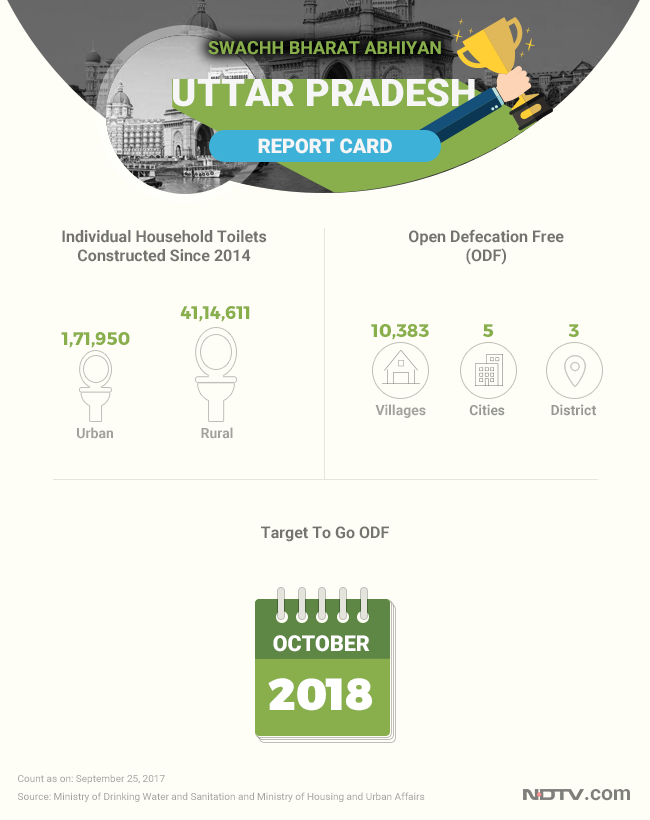 To accelerate the slow progress in both rural and urban areas, Chief Minister Adityanath earlier in March asked senior state government officials to make 30 districts in the state open defecation free, take the sanitation pledge and also ensure that the pledge is implemented. Furthermore, the government came up with an idea of giving one toilet each to the less fortunate families under the Pradhan Mantri Awas Yojna. For this Rs. 12,000 crore has been allotted for rural areas and Rs. 10,000 crore have been allotted to urban areas of the state by the UP government.

Also Read: To Make Urban Uttar Pradesh Open Defecation Free By 2022, Additional Assistance Of Rs. 12,000 Will Be Given Per Toilet

“We need to meet the ODF goal by 2018, for this, it is important that each and every citizen participates. I have personally requested to all the officials at all levels to participate in Swachh Bharat activities and fulfill the dream of ‘Swachh Uttar Pradesh,” said CM Yogi Adityanath during the launch of 15-day cleanliness drive – Swachhta Hi Seva (Cleanliness is Service) campaign in Uttar Pradesh.

At the ground level, every effort is being done to increase demand for and use of toilets, alongside improving sanitation infrastructure. While speaking to NDTV, Yogendra Katiyar, Deputy Director, Swachh Bharat Mission (Gramin), Uttar Pradesh, stated that the key to eliminate open defecation is to make young children develop the habit of using toilets. This will break the inter-generational cycle of open defecation. We are using community led sanitation scheme (CLTS) strategy to create a new social norm that open defecation is dirty, disgusting and bad for health.

“There are many factors affecting rural sanitation behaviours, the most salient of which are social norms, customs and traditions around open defection as people believe that open defecation is not a health threat. Other important factors include perceptions of toilet affordability, access, availability of functioning toilets and its maintenance. Our observations highlight that toilets that are built by households are the result of demand, and reflects better awareness, health issues or better socio-economic standards. Also, we are promoting a variety of innovative, cost-effective toilet technology like the twin-pit toilet to drive demand,” said Mr Katiyar.

“Swachh Bharat Programme Implementers and Swachhta Doots/Senas working at ground level first get trained for 5-days on how to motivate people to let go of the traditional practice of open defecation. Post the training, officials then go to stay in villages without letting villagers know that they are there to educate them and to construct toilets, rather they pose themselves as travellers. They ask villagers to make them aware of their day-to-day activities and show the area around. During these discussions, villagers themselves state that in the morning they go to fields to defecate. This is when our officials start educating them of the bad effects of open defecation. And, once the village goes ODF under the scrutiny of these officials, we reward them with Rs. 10,000 for their work,” the deputy director added.

Mr Katiyar also highlighted that in the recent days, the Uttar Pradesh government has been constructing toilets at the rate of 33,000 toilets per day to ensure that the state meets the target of being ODF by October 2018.

One noteworthy example of effective use of CLTS approach is of Shamli district, which emerged as the first district of the state to become ODF with the construction of 39,967 toilets across 320 villages. The district administration managed to achieve this feat by carrying out a personalised way to change behaviour related to open defecation among people, who otherwise were of the opinion that defecating in the open during a casual morning walk was a healthy practice. As part of the CLTS approach, the district administration formed groups, which knocked the doors of households in the villages to interact with individuals about the benefits of having a toilet at home and using them. This CLTS approach further ensured that that all members of a village community, irrespective of their age and gender contribute towards the sanitation campaign. Shamli, which had sanitation coverage of 71.65 percent in 2015, soared to 100 percent in 2017, thanks to the collaborative efforts of the locals and district administration.

When villagers come forward to end open defection on their own:

Another example where villages came forward to eradicate open defecation is from Bijnor district. Around 13 villages from Bijnor are returning the allocated funds (to construct toilets as part of Swachh Bharat Abhiyan) to the local panchayats to improve infrastructure and are building toilets with their own money. The villagers are financially supporting the poor families to construct toilets, and have named the toilets as Izzat Ghars or Dignity Homes in honour of the women.

Also, the performance of Uttar Pradesh under the Namami Gange programme has been satisfactory. Of the 1,847 villages situated on the banks of river Ganga, which flows through 25 districts of Uttar Pradesh covering 1,140 kilometers, the state has managed to eradicate open defecation from around 1,600 villages.

The city of Agra with the landmark Taj Mahal, also a part of Swachh Iconic Place initiative, which is a special clean-up initiative focused on select iconic heritage, spiritual and cultural places in the country, a total of 5,728 toilets have been constructed, along with 579 community toilets and 176 public toilets. Under the Swachh Iconic Place (SIP) initiative launched by the Central government, a total of seven wards surrounding the monument where most of the tourists reside are being revamped by the Agra Municipal Corporation (AMC), which takes care of sanitation and cleanliness outside the premises. Since 60% of the population in Agra consists of slum dwellers the problem of open defecation and urination was a major challenge in the city but the administration tackled it well. A total of seven wards were made open defecation free (ODF) in the last one year and recently about 200 families residing in Ghaseyari mandi close to the monument were provided individual toilets.

Ever since Yogi Adityanath assumed office of Chief Minister of Uttar Pradesh in March, he has laid emphasis on improving the state’s performance in the Swachh Bharat parameter. He has urged “everyone needs to do shramdaan” for 100 hours in a year and appointed Akshay Kumar as the brand ambassador of the Swachh Bharat Mission in the state.

But what remains to be seen is how the officials and people of the massive state like Uttar Pradesh will collectively achieve the target of making it open defecation free, that too by 2018.

Can Union Territories Of India Achieve The Tag Of Open Defecation Free By March 2018?