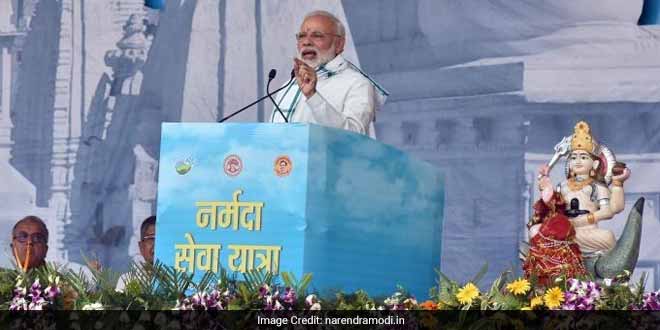 Calling the ‘Naramada Seva Yatra’ a mass movement, Prime Minister Narendra Modi unveiled the plan to protect and conserve Narmada river today at Amarkantak in Anuppur district, Madhya Pradesh. He congratulated 25 lakh people who whole-heartedly participated in the yatra, “more than 2.5 million people have taken pledge of protecting mother Narmada,” he said. He also credited the success of Swachh Bharat Abhiyan to people. The yatra was started on December 11, 2016 from Amarkantak where the river originates and covered a distance of 3,344 km, passing through over 1,100 villages and towns.

Success of Swachh Bharat Mission is not due to governments, it is due to people: PM @narendramodi

PM Modi lauded the roadmap for conservation of Narmada and called it a ‘perfect document for future vision’. “The document was sent to me in advance and I had gone through it. It has the details of what is to be done, by whom, and at what time,” he said. He also said that other states should refer to this document and implement these points to save their respective state rivers.

The document presented by the MP Government is futuristic with several learnings: PM @narendramodi #NarmadaSevaMission pic.twitter.com/VBVGmARQV5

PM Modi also raised concerns over dying rivers across India and said, “Many rivers in the country are on the map but do not have any water in them.”

To protect one of the country’s lifelines – Narmada, from discharge of effluents, the CM said henceforth discharge of industrial waste will not be allowed, “We have decided that there will be no industrial discharge into Narmada from factories of MP.” The state will also install sewage treatment plants in 18 cities of Madhya Pradesh he added.

We have decided that there will be no industrial discharge into #MaaNarmada from factories of MP: CM @ChouhanShivraj #NarmadaSevaMission pic.twitter.com/qCkw0JlJSE

The state will also deploy ‘Narmada Sevaks’ who will be in charge of upholding Narmada’s living entity status, said CM Chouhan.

PM Modi congratulated the state government for adopting the technique of afforestation to rejuvenate the auspicious river. To protect the river, the Madhya Pradesh government will plant 6 crore plants by July 2. As part of afforestation activity, the state will also remove eucalyptus and plant local trees like saal, mahua, bargad and peepal.

On a concluding note PM Modi called for an action to fulfill the dream of a clean Narmada and said, “The Narmada Seva Yatra has ended but the Yagya has begun, to achieve the aims with which we commenced this Yatra,” he said.