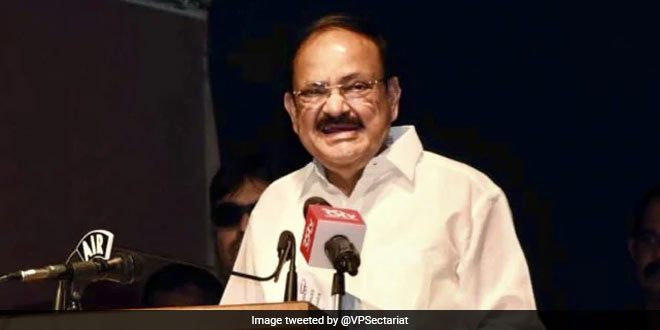 New Delhi: Of the total 159 million children aged below 6 years in the country, 21 per cent are undernourished, 36 per cent are underweight and 38 per cent do not receive full immunisation, said Vice President M Venkaiah Naidu on Friday (September 4) quoting ‘The State of Young Child in India’ report. Mr Naidu released ‘The State of Young Child in India’ report, a comprehensive account of the challenges related to early child development in India. He called for a well-strategized collective action on multiple fronts to ensure well-being of young children for India to take full advantage of demographic dividend.

Also Read: National Nutrition Week: What Is NOVA Classification Of Food And How It Can Help In Making An Informed Choice?

It has been mentioned in the just-released report that of the 159 million children aged below 6 years in India, 21 per cent are undernourished, 36 per cent are underweight and 38 per cent do not receive full immunisation. These figures underline the crucial importance of investing in early childhood for realising the full potential in later years. The years from birth until the age of five were critical, Naidu said during the launch event.

“For healthy development, children should grow up in an environment where their emotional, social, educational and other needs are fully met. Educated and healthy people with a good foundation in the early years contribute to the financial and social wealth of their societies,” he added.

The report also pointed to the insurmountable evidence of the huge returns on investment in Early Childhood Development (ECD) at the individual, household and country levels, Naidu said.

According to the report, proper nutrition, stimulation and care during the first 1,000 days of life (from conception to the second birthday) has a profound impact on the child’s ability to grow, learn and rise out of poverty, and in the process shape society’s long term stability and prosperity, he said.

Mr Naidu further said that it is estimated that early childhood stunting affects nearly one-in-four children younger than five globally due to lack of nutrition.

Under-nutrition and poor sanitation can lead to developmental delays and a lack of progress in school. For a country, poor early childhood development could mean economic loss. We need to understand the crucial importance of this aspect of national development and take effective steps to ensure all children have a healthy start to their lives, he said.

As per an official release, the report has been prepared by Mobile Creches, a policy advocacy organisation which works with underprivileged children across India.

Mr Naidu said that such reports help in policy formulation by developing a greater understanding of the shortcomings and urgent needs of the children. He also appreciated the publisher Taylor and Francis Group for making the digital copy of report freely available for everyone.

“Based on ranking and values on the Young Child Outcome Index (YCOI), the report named Kerala, Goa, Tripura and Tamil Nadu to be among the top performers, while eight states– Assam, Meghalaya, Rajasthan, Chhattisgarh, Madhya Pradesh, Jharkhand, Uttar Pradesh and Bihar– with scores below the national average lagged behind,” the release said.

Also Read: “The Goal Of National Nutrition Week Is To Create A Healthy Nation,” Says Dr Harsh Vardhan As He Urges Everyone To Eat Right

The report has pointed to the criticality of a holistic approach to development, including public awareness and parental education, improved living conditions with access to clean drinking water, proper sanitation and reliable primary healthcare service to make a difference to health and nutritional standards among children.

With ‘Do Not Sit Here’ Stickers, No Cash Transactions Delhi Metro Services Resume With Strict Protocols