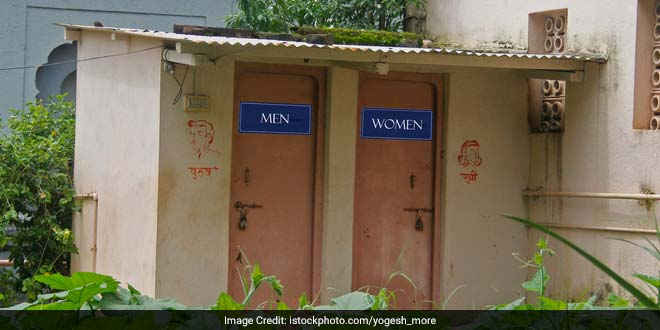 The scarcity of clean water in India has been a worrisome issue for many years now. 76 million people in India lack access to water that is safe to drink or even be used for other household purposes. Most of our rivers are polluted and our groundwater is rapidly depleting due to over usage. On the other side, the growing popularity of the Swachh Bharat Mission means that more than 3 crore toilets have already been built in India since 2014. While toilet construction is a critical step in ending the scourge of open defecation, most toilets being built under Swachh India mission are water-intensive. In a country scarce in water supply, it often leads to an unusable toilet with no water.

Water and Toilets: Two sides of the same coin

The first identifiable problem is the stark discrepancy in the allocations for toilet building and improvement of water resources. For the financial year 2017-18, Swachh Bharat (Rural) received central allocation worth Rs 13,948 crores, a fair increase from the 10,000 crores allocated in the previous financial year. However, the allocation for rural water infrastructure improvement was merely Rs 6,000 crores, less than half of what has been allocated to Swachh Bharat (Rural). The Ministry of Water Resources estimates that each rural household in India needs 40 litres of water every day, out of which 15 to 20 litres are required for sanitation. But as of 2017, almost 19,000 villages in India are yet to have access to piped water supply. Even the ones that do get piped water, getting 40 litres a day remains a distant dream. On an average, a well-supplied rural household receives 8-10 litres of water per day and as water is mostly utilised for cooking, drinking and washing, using it for sanitation becomes the last priority.

The discrepancy in allocation shows that there is lack of understanding on how toilets and water requirement is co-related to one another. Unless there is equal expenditure on resources for development of both sanitation and water availability, people will abstain from using toilets on a regular basis, said Dr. Narayan Hegde, Principal Advisor, BAIF Development Research Foundation.

Certain sectors in India are trying to construct toilets which consume less water on usage, considering the water scarcity scenario in India. Railways have earmarked Rs 50 crores for the development of waterless and odourless toilets in trains.

Sanitation and water go hand in hand. There are many in the country who do not have access to clean water and toilet. All our coaches will be equipped with bio-toilets in the next two years and we have developed bio-vacuum toilet as a pilot project, said Union Minister of Railways Suresh Prabhu at a recent event.

Receding water levels is a recurring problem in India, especially during the summer where drought prone areas of Maharashtra, Madhya Pradesh, Gujarat and Tamil Nadu require more water from the reservoirs. The Central Ground Water Board reported that in 2015, 6,228 wells in these four states showed decrease in water levels of up to 2 metres. With receding water levels, it is quite improbable that people would use water for toilets rather than cooking or drinking.

Receding water levels translate to less than adequate availability of water. When such a situation arrives, as it happens every summer in the drought prone states, people with limited water supply cannot be expected to use toilets, which require a fair quantity of water, said Avinash Kumar, Director, Program and Policy, WaterAid.

In 2016, the National Sample Survey Organisation (NSSO) came out with a report titled ‘Swachh Survekshan’ which reported that only 42.5 per cent rural households had water to use in toilets. Most people among the remaining 57.5 per cent said that they preferred storing water rather than use it for sanitation purposes, because the supply remained erratic and they couldn’t afford to use it for anything other than drinking or cooking. 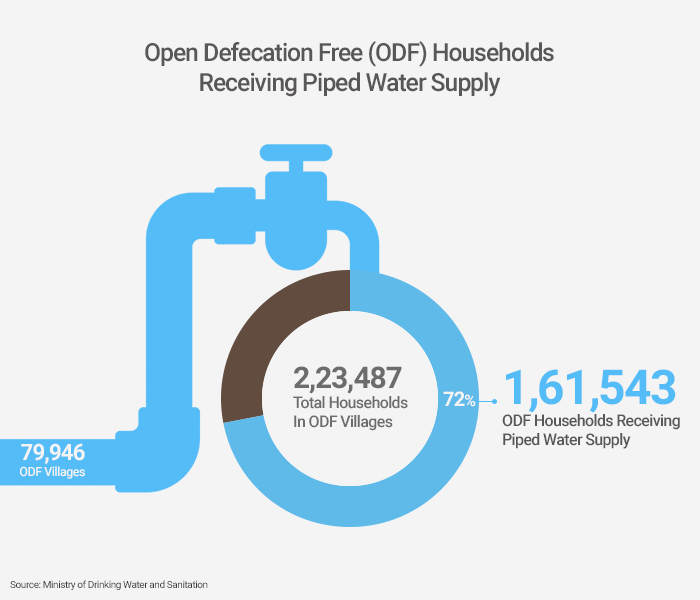 79,946 villages have been verified open defecation free, and about 72% of these have water supply

Without piped water supply, a household toilet remains unusable. The ODF habitations which are yet to receive piped water supply should be given priority if Swachh Bharat Mission is to become successful. People who are long habituated to the practice of defecating in the open may continue to do so even if they have toilets in their houses, but no water supply to use them, said Mr. Avinash.

The problem of polluted water

Using water from sources which are depleting also pose significant health risks for people. Untreated and polluted river water is often used for sanitation, especially by people living close to rivers. The ambitious Namami Gange programme which was set up to clean the Ganga has touched upon this issue to make water cleaner and the flow more regular so that the villages along the river have regular access to clean water from the river. Under the Namami Gange programme, 75 per cent villages have already become open defecation free. It remains to be seen whether they receive adequate water or not.

Eastern states like West Bengal, Jharkhand and Orissa face another serious problem – arsenic in their groundwater. 40 million people in India already reside in arsenic affected areas. Groundwater in these areas is already arsenic laden, and using such water for sanitation purposes result in complicated health issues. However, the water reservoirs in these areas store 49 per cent of their capacity, against the national average of 31 per cent. So even with the construction of toilets in the eastern belt, the water availability scenario is marginally better

Using arsenic laden water for sanitation is dangerous. The arsenic level in water in the eastern belt is higher than the rest of the country.  The gradually receding water level means that people will be using arsenic laden water for day-to-day purposes, including sanitation. This will surely have health implications for them, said K.B. Biswas, Chairman, Central Ground Water Board.

Though Swachh Bharat Abhiyan is a programe under the Ministry of Drinking Water and Sanitation, very few questions have been asked whether India, especially rural India is equipped with water resources to ensure that the toilets being built are functional and usable. The receding water levels, especially during the summer does not help as using water for sanitation is deemed as wastage by water-starved villagers. A pan India infrastructure to look beyond river and groundwater sources, such as rainwater harvesting may better India’s water resources and provide enough water availability in rural areas for people to use water properly for sanitation purposes.

There also needs to be a closer look at the kind of toilets being constructed in the effort to get Open Defecation Free. There are enough examples from around the world and within India itself of waterless-toilets, which with their efficient design can drastically reduce our dependence on water for sanitation.

Related Topics:
Toilets Water and Sanitation
Up Next