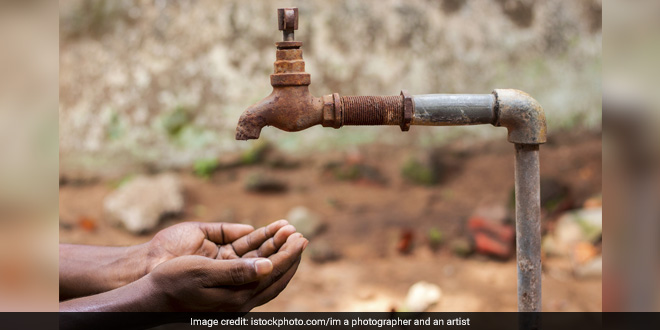 New Delhi: Taps, wells, hand pumps running dry is a real fear that looms large in many parts of India. Apart from freshwater sources drying up the other huge issue India faces is the risk of water-borne diseases due to lack of clean, treated water. The need of the hours is to not just clean-up the freshwater sources, but conserve every drop of water and recycle as much as possible.

72-year-old N. Arunachalam, a former chief engineer from Madurai, adopted some of the best practices when it came to water conservation and is now reaping the benefits of his efforts for over 30 years by being water self-sufficient and not having to pay any bills for it. He started water conservation as early as 1985 using a technique he learnt from his mother and grandmother of collecting rainwater in giant copper vessels. The collected water would then be recycled and used for the purpose of drinking and cooking. In a conversation with NDTV recalling his initial years, Mr Arunachalam, said,

During our school holidays, our parents would take us to our ancient house at Kallal, a village in Sivaganga District of Tamil Nadu. In the course of our visit, whenever it rained, my mother and grandmother would call me to help them in collecting rainwater in a giant copper vessel. The collected water would then be filtered using a dhoti (man’s wrap around) to make it usable for the purpose of drinking and cooking. The excess water was then used for washing floor in our house, with an area of 5000 square feet. 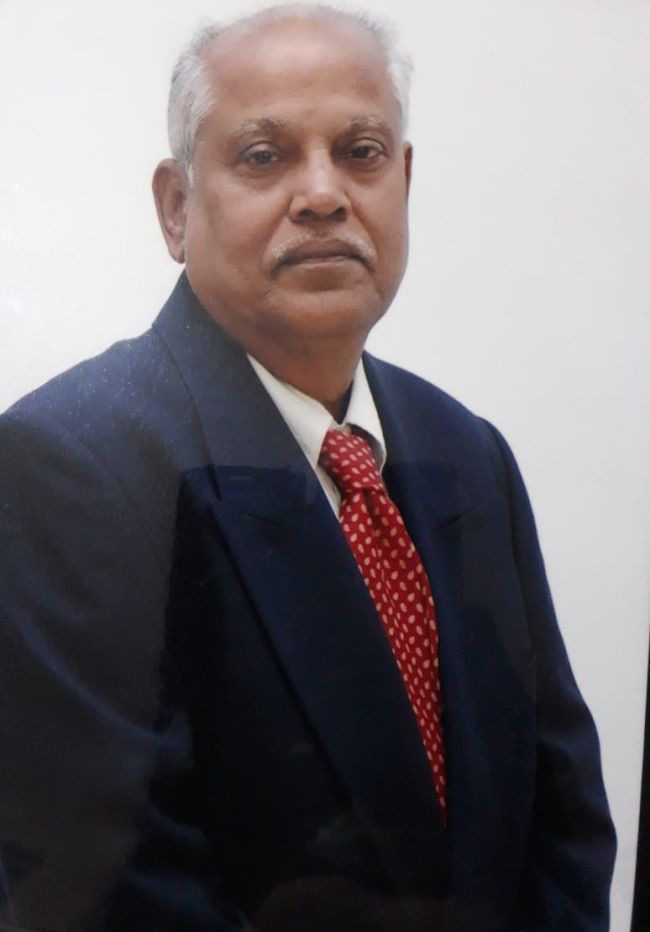 During his civil engineering days, Mr Arunachalam was very interested in structural design, geology, and hydraulics involving various water saving techniques. Later in 1970, he joined the Public Works Department (PWD) as an assistant engineer and started promoting the concept of rainwater harvesting among government offices, schools, and corporates.

In 1985, when Mr Arunachalam built his own house, he ensured the structure had adequate rainwater harvesting system in place which involves catchment area, water storage tanks, filtration chamber, among other things. 34 years down the line, Arunachalam’s uses only recycled rainwater for drinking and cooking and hasn’t paid any water bill in over three decades.

I believe water is a nature’s gift and buying or selling it is a crime. Rainwater harvesting can help people become self-reliant in terms of water, says Mr Arunachalam, as he shares his experiences, lessons, and dos and don’ts on rainwater harvesting and recycling.

N. Arunachalam, the water warrior from Madurai follows ‘gravity flow’ technique for harvesting and recycling rainwater and aiding groundwater recharge. Gravity flow starts from the roof which is the catchment area and ends in the ground with recharging of groundwater.

The collected water is directed to a filter chamber for the purpose of filtration. Rainwater passes through three layers of filtration – fine sand, charcoal and finally pebbles. With the help of gravity, the filtered water is directed to the underground sump. The motor pumps water from underground sump which is the storage tank to the overhead tank installed on our roof, says Mr Arunachalam.

Mr Arunachalam has installed a water pipe connecting the overhead tank to the kitchen, making it easy to fetch water for the purpose of drinking and cooking. In the kitchen, the purified rainwater is collected in a container, again filtered using a dhoti, boiled, cooled and poured in a stainless steel container. After this, the rainwater is safe for use. 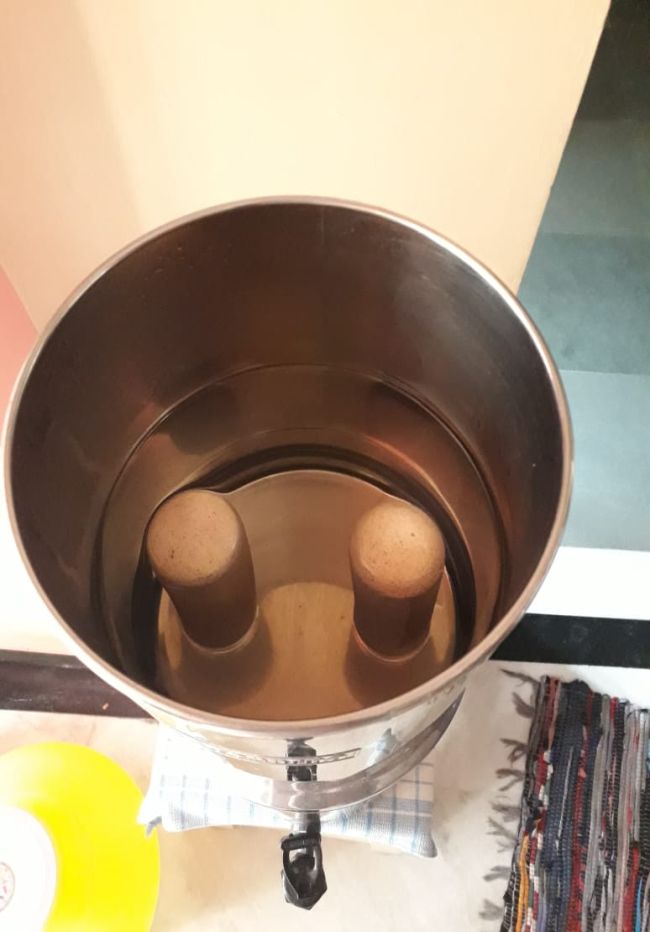 Meanwhile, overflow from underground sump or storage tank is sent to the ground, for the purpose of recharging borewell.

One should clean pebbles and sand using an antiseptic liquid and dry them in sunlight for a day, reason being, these pebbles are obtained from rivers which are used and spoiled by humans these days, says Mr Arunachalam.

Also Read: Five Things India Should Do To Avoid A Water Crisis

This way, Mr Arunachalam saves 16,000 litres of water every year, sufficient for three families – Arunchalam’s family of three uses 8000 litres every year and the remaining 8000 litres are used by two families of tenants. While harvested and recycled water is used for the purpose of drinking and cooking, water from borewell is utilised in bathing and washroom. The family is relying solely on recycled rainwater and doesn’t have a connection to water supplied by Municipal Corporation.

India gets 94 per cent of the water from rain, if we do not do enough to conserve it, we will definitely run out of water. Harvesting rainwater should be the primary responsibility of every individual. If people (just like Mr Arunachalam) make arrangements to collect rainwater we will have enough water the year round without depending on water tankers and shelling extra money. Rainwater is completely safe to drink, we simply need to be careful of the collection and filtration process, says 40-yar-old Subhajit Mukherjee from Mumbai, advocating groundwater recharge through rainwater harvesting.

Is Rainwater Harvesting And Recycling Feasible?

Mr Arunachalam who is using only rainwater for the last 34 years believes water crisis will continue to prevail in the country because of population growth, global warming, deforestation, and other things, and current plausible and the doable solution is to harvest rainwater, recycle and reuse it. The rainwater harvesting crusader is of the opinion that spending on a rainwater harvesting system is a one-time investment and the expenditure can easily be recovered within the first five years.

I suggest getting a rainwater system in place while building your own house as it is easy to get things in place then only. During construction, it will cost you only Rs. 2.5 lakh which is nothing as compared to what you will be spending on the creation of entire structure, furniture, interior decoration and others. Individuals willing to harvest rainwater should always seek expert guidance and approach engineers to get the thing right. Talking to plumbers who don’t have complete knowledge won’t benefit you in anyway, says Mr Arunachalam.

According to the Composite Water Management Index (CWMI) report released by NITI (National Institution for Transforming India) Aayog in 2018, 21 major cities (Delhi, Bengaluru, Chennai, Hyderabad and others) are racing to reach zero groundwater levels by 2020, affecting access for water for 100 million people. The report blames excessive groundwater pumping, an inefficient and wasteful water management system and insufficient rains. The report also states 12 per cent of India’s population is already living in places with zero groundwater and by 2030 the country’s water demand is projected to be twice the available supply.

The water resources for any city are the groundwater, surface water and rainwater. If we take Hyderabad as an example, groundwater used to be at 30-40 feet in the 1920s and today we are going beyond 2000 feets. The city receives about 80mm of rainfall. We don’t care to conserve, we throw it in our drains. If we take 1 square km of area with 1 cm rain for an hour, you can capture equivalent to 5000 water tankers and that’s how much you can recharge groundwater, says Kalpana Ramesh, an activist, and water conservation from Hyderabad.

Also Read: This NGO In Chandrapur Is Educating People About Importance Of Water Conservation

While washing hair with purified rainwater prevents hair loss, using it for shaving increases the life of a blade. Washing clothes in the rainwater will bring down your usage of detergent by 50 per cent. The food prepared in the rainwater will have an added, unique taste and will not be spoiled even for two to three days. Your overall health will improve as rainwater will take care of your kidneys and protect you from urinary infections. Together these benefits will reduce your expenditure on health care. It is a win-win situation, shares Mr Arunachalam.

Backing the rainwater harvesting consultant’s opinion, Ramkumar, one of the residents of Meridien Corner Apartment in Madurai, says,

So far lack of awareness among people and proper enforcement by government is considered to be the major reasons behind rainwater harvesting not being adopted in a big way, across the country.

Talking about how the status of rainwater harvesting can be improved, Mr Arunachalam says,

Currently, he is helping his village Kalal, from where his story began, in implementing the rainwater harvesting system in a lake called ‘Chinna Urani’. Parallely he plans to submit his proposal to the Prime Minister and Finance Minister and approach apartment and residents association in Madurai to educate and encourage them to harvest rainwater.

We shouldn’t blame the central or state government for the prevailing or impending water crisis. The government can’t manufacture water. Each and every household should implement rainwater harvesting system and reap its benefits, signs off Mr Arunachalam.

Warriors Of The Decade: Here Are The Heroes Who Are Fighting For A Swachh And Swasth India