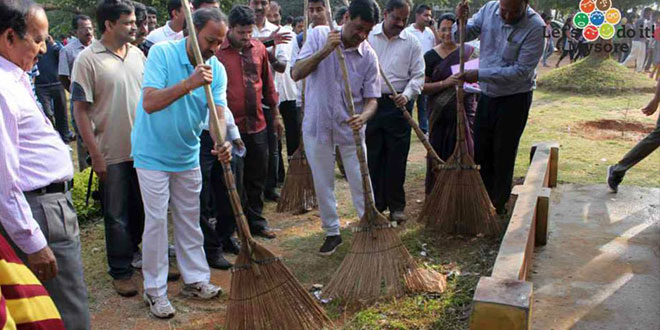 A busy road adorned with shops and stalls on every side, buzzing with crowds through the day. Sellers flaunting their wares, buyers haggling to get the best price. But in the usual sights and sounds of the marketplace what gets unnoticed is the steady pile up of waste. The pile keeps growing in size with each passing day, in the absence of bins for proper disposal. As the waste spreads some more,  people keep purchasing items from the shops and the shops decide to keep dustbins outside their premises. And soon there is a noticeable transition in the scene, the scenario changes in a few days as people start using the dustbins and the waste pile up starts shrinking and ultimately clears up.

The scene is straight out of a promotional short film produced by the Mysuru City Corporation (MCC), in a bid to encourage waste management among the citizens of Mysuru. Ahead of Swachh Survekshan 2018, scheduled to begin on January 4, Mysuru’s municipal corporation has begun an innovative campaign to reach out to more people and sensitise them about waste management. The campaign aims to popularise the municipal corporation’s efforts to provide better civic amenities in the city for the past one year.

Ever since the Swachh Bharat Abhiyan began, our aim has been to make greater impact on people on the issues of cleanliness, sanitation and waste management. We chose short films as the preferred medium because people would be hooked to watching short videos and eventually learn about civic discipline, said G. Jagadeesha, Commissioner, Mysuru City Corporation.

The MCC hired a few short filmmakers in September this year, who were asked to document some of the works done by the civic body to improve the city’s sanitation and waste scenario. Though Mysuru has been a traditional performer in Swachh Survekshan, its slide from number one position in 2016 to number five in 2017 had the municipal authorities worried. The short filmmakers were also asked to create short films which would spread the message of the themes that the MCC was stressing on, namely waste management and segregation.

One of the shorts on waste composting was shot at the Municipal Commissioner’s house, as he felt that people must get to know more about composting and how easy the task of composting is.

Citizen feedback forms a very important component of Swachh Survekshan 2018 and we cannot expect to get positive feedback from citizens unless they are aware themselves. This whole exercise has been undertaken to fulfill the dual purpose of both sensitising citizens and making sure that they value the work that has been done by us in the past one year when providing feedback for the Survekshan, said Mr Jagadeesha.

Mysuru has built over 70 public toilets since Swachh Survekshan 2017 and around 45 wards now have three or more public toilets. Out of the city’s 65 wards, door-to-door garbage collection and 100% waste segregation has been recorded in 55 wards, a number the MCC is hopeful will bear fruit when the 2018 Survekshan takes place. The MCC has also placed colour coded dustbins throughout the city to encourage segregation when disposing waste.

The short films are being circulated via WhatsApp to the citizens of Mysuru. The civic body has also built a ‘Swachh Vehicle’ with digital screens attached, which plays the short films continuously. The Swachh vehicle will roam around the city till Swachh Survekshan 2018 concludes. Apart from the short films, video messages from the Chief Minister Siddaramaiah and former cricketer Javagal Srinath, who is also the ambassador of Swachh Mysuru, will also be played on the screens.

This College Aims To Unburden Mumbai’s Landfill Burden By 8,000 Kilos Every Month, Here’s The Plan