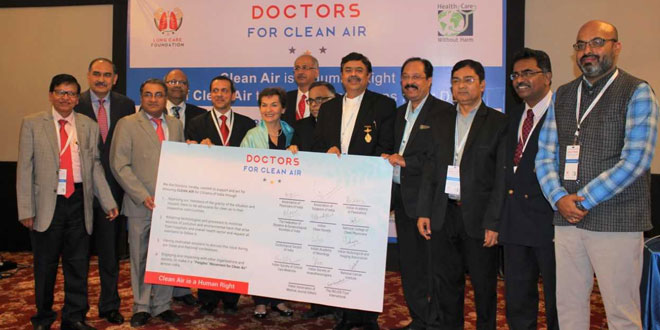 New Delhi: To fight against air pollution and raise awareness among people and the government to work towards better air quality, Lung Care Foundation in partnership with Health Care Without Harm, launched ‘Doctors for Clean Air’ (DFCA) campaign on Tuesday. As part of DFCA, 12 medical associations, representing over 1.5 lakh doctors across India, have pledged to be advocates for clean air in their respective regions. These doctors will also urge the policy-makers to adopt policies that improve the health of the people and mitigate climate change.

Lung Care Foundation is a Delhi based non-profit organisation that works to raise awareness about lung health and Health Care Without Harm is an international non-government organisation that works in over 50 countries to transform health care worldwide in order to reduce environmental footprints by reducing and managing medical waste, toxic materials, chemicals, and pharmaceuticals.

We want our Clean Air Champions, the doctors to lead the war against air pollution by actions for clean air for all.

The Doctors under this campaign will also be training regional doctors to become advocates for clean air. They will also promote and support health and air pollution studies. They create content in the local language and engage with the local media to highlight the ill-effects of air pollution. They will also engage with school children, teachers, and religious organisations on the same.

Dr Arvind Kumar, Founder and Managing Trustee of the Lung Care Foundation, said that it was time for medical professionals to lend their voice for raising awareness about the devastating health impact of air pollution through their interactions with patients.

Air pollution has been recognised by the United Nations as a key risk factor for non-communicable diseases (NCDs). The declining air quality correlates with increased risk of heart disease, lung cancer, and respiratory disorders, such as asthma and Chronic Obstructive Pulmonary Disease (COPD)

Former UN Official Christina Figueres, who was the Executive Secretary of the United Nations Framework Convention on Climate Change 2010-2016 and Co-Chair of Every Breath Matters said,

Doctors can play an important role in the society to deal with problem of climate change and be a powerful voice to raise awareness about the devastating health impacts of air pollution in India and put pressure on decision-makers to clean up the air, tackle climate change and protect health of individuals. Clean air is a human right, and every breath matters.

Clean air is a human right but 9 out of 10 people do not have it. Outrage!! https://t.co/XvKwymRWtT

Stating that the Paris Climate Agreement is a global safeguard for human health, Ms. Figueres said that every country promised that they would take actions to address climate change and respect, promote and consider their respective obligations on the right to health. She added,

There is a need for public outrage to press governments into action and make them adopt policies to mitigate climate change and treat air pollution as a medical emergency.

A recent report by Lancet Countdown, an international organisation that tracks the connection between public health and climate change, claimed that half a million deaths in India are due to ambient air pollution. A study by the World Health Organisation (WHO) also states that 91% of the world’s population lives in places where air quality exceeds permissible limits, the majority being in developing and under-developed nations. WHO ranks 14 of the most polluted cities in the world from India, giving a clear picture of the pan-India nature of this problem.