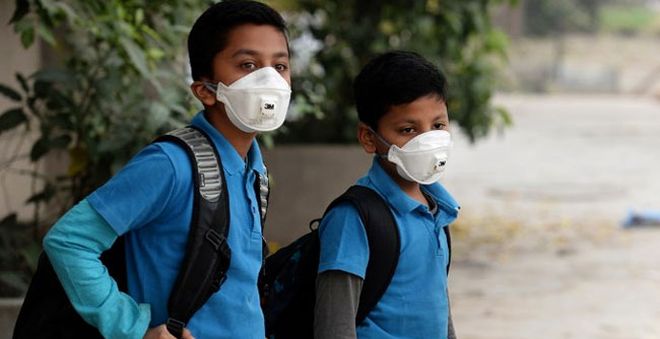 New Delhi: Air Pollution crisis returns in national capital – New Delhi yet again. The levels rose further last week putting the Air Quality Index (AQI) in ‘severe’ category in several areas of the city. According to the System of Air Quality and Weather Forecasting And Research (SAFAR), the PM 10 and PM 2.5 levels were reported at 314 and 182 micrograms per cubic metre, while the safe averages are 100 and 60, respectively.

Concerned with the rise in Air Pollution, top doctors claimed that air pollution is also compromising mental health of children apart from their lungs. The air the children breathe has the presence of nitrogen oxides and sulphur oxides, which are responsible for affecting brain cells that causes a decrease in the IQ level.

Also Read: As Delhi Breathes Toxic Air, Here Is What It Can Learn From Other Megacities To Clear Its Toxic Smog

As children are in a growing stage, when they inhale polluted air, the pollutants through their blood travels to parts of the body including brain.

Pollutants like NO2 (nitrogen dioxide) and SO2 (sulphur dioxide) affect the brain cells which causes decrease in IQ level and other related problems.

Children are more vulnerable to such health risks as their lung capacity is small and respiratory rate high, therefore they are more likely to inhale more air per unit of their body weight than adults.

Stressing that harmful health impacts of air pollution seem to be increasing with each passing day as pollution level reaches extremely toxic level, she said the new studies shows that the “future of our kids is in grave danger until such situations are handled with every means necessary”.

As per the study published in the British Medical Journal that examine pollution exposure in 500,000 participants under the age of 18, air pollution can cause significant increase in treated psychiatric problems. The results highlights that mental and cognitive health is at great risk due to polluted air, putting children at even higher risk.

It’s not just Mental Health, according to the recent report by Centre and Science Report titled ‘Body Burden’, every third child in Delhi has impaired lungs and it is also responsible for 30 per cent of all premature deaths in the country.

The air quality in Delhi is expected to further deteriorate and the levels are expected to rise further and remain in ‘very poor’ category this week as well.

Recently on Childrens’ Day, when National Health emergency was declared in the city as its pollution levels was about 10 times the reading in Beijing, the city globally infamous for its air pollution and emergency steps were taken like schools were shut down.

Vidya, a 11-year-old student of Shri Ram School, voiced her concern on how Air Pollution is impacting children like her to the Prime Minister Narendra Modi. Speaking to NDTV, she adds,

It is really hard to breathe in the pollution and we have to wear masks. You can wear mask for a while but after sometime, you feel suffocated. Schools were all cancelled and sports days and trips on which children have been working on for months just got cancelled. It’s not fair but we have no choice because of the pollution.

Few days later, when things were better and the air quality was out from ‘severe’ to ‘very poor’ category, all the emergency steps taken by the government were rolled back. But, the irony is that Delhi is still breathing ‘Unhealthy’ air. It is time authorities should figure out some long term solutions for Air Pollution to avoid a repeat  every year.