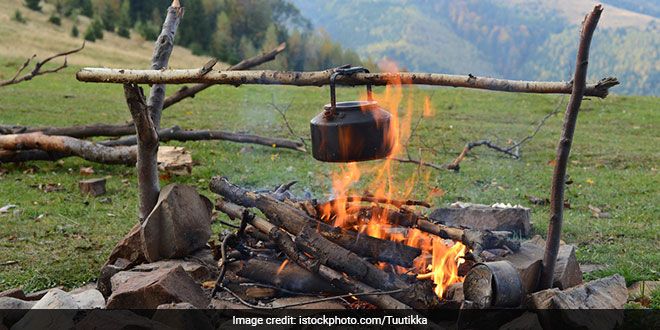 New Delhi: The high altitude destinations around the world are perceived to have a clean environment, and are the preferred places for tourist attractions. However, such places are environmentally degrading due to ever increasing tourists and associated emissions, said a new study. As compared with the toxic gas chamber that the national capital and neighboring states had turned into since November 2017 due to stubble burning and Diwali related pollution, one would think Jammu & Kashmir’s capital Srinagar, located at an altitude of 1592 meters, is relatively pristine. But the study jointly conducted by a team of scientists from Pune-based Indian Institute of Tropical Meteorology (IITM) and University of Kashmir, says that is not the case. In a surprising find, the study revealed that pollution in Srinagar hits dangerous levels during winter months as the air carries five times more tiny particulate matter than the permissible limit.

Also Read: India Incurred $55.39 Billion Worth Of Losses In Terms Of Labour Output Caused By Air Pollution In 2013

Terming it a worrying development, the experts found that PM 2.5 levels in winter touched 348 micro-grams per cubic metre, which is five times higher than the national permissible limit of 60 micro-grams per cubic metre, mainly due to the use of coal for domestic purpose. The emissions due to domestic coal usage are found to be 1246.4 tonnes per year, which accounts for 84 percent of the total annual emissions,” the study said.

In Srinagar valley, where most of the power supply comes from hydel power generation, the rivers freeze and there is a sharp decline in the flow of water, making power supply minimum when required the most. People then make use of conventional energy sources as an alternative to state run power supply. They use traditional firepots known as kangris, ignited by charcoal, to keep themselves warm outside and burn firewood in a hollow room known as hamam for central indoor heating. The study, conducted between May 2013 and April 2014 and the report of which was released recently, further revealed that cold temperatures with dry conditions along with elevated level of biofuel emissions from domestic sector are found to be the major processes responsible for winter period particulate pollution.

Also Read: Centre’s Plan To Tackle Air Pollution To Now Include Cities Other Than Delhi-NCR, And Rural Areas

Shakil Ahmad Romshoo, Head, Department of Earth Sciences at Kashmir University, and one of the authors of the study, said:

It is worrying that the air quality in Srinagar is worst among all Himalayan states in the country. There are inter-annual variations. The dry weather in winter months spike up the pollution levels, while it decreases whenever there is rainfall or snowfall.

In terms of the emissions from vehicular combustion, the study found it to be 220.5 tonnes per year which accounts for 15 percent of the total annual emissions. The study also revealed that the westerly winds originating from dry Afghanistan and surrounding areas dump loads of dust, thus contributing to the high PM2.5 levels during winters.

Speaking on the measures to keep a check on the pollution levels, Mr. Romshoo said, “The government should harness the vast hydro-power potential which would reduce the dependability on conventional sources especially in the winters. The number of cars on the roads needs to be decreased to check emission of fossil fuels. According to the government data, the state adds up to 1.5 lakh vehicles every year. People are forced to use their own vehicles because of the lack of efficient transport system,” Mr. Romshoo further added.

The geographical location of the region also plays an important role, which may result in long-range transport of pollutants. In recent times, the Kashmir Valley has become the largest urban centre across the whole Himalayan region and is undergoing areal expansion and facing high rates of population growth, the report noted.

The study also warned that urbanisation and the increased use of biofuels in the valley are disturbing the environment. In addition to this, the lower mixing heights, limited dispersion and long-range transport of pollutants results in higher pollution levels during winter, as the pollutants get trapped in the lower layers of the atmosphere.