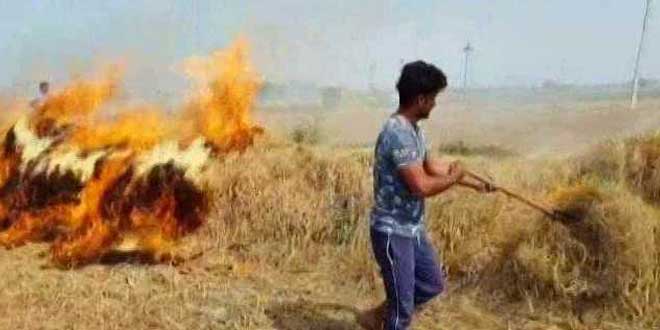 Ludhiana: Stubble burning creates a huge environmental problem and farmers of Punjab are aware of it but still resort to this practice, saying there is no viable alternative available. Now, an innovative experiment aimed at creating a new market for rice straw by converting this waste material as an energy feeder in boilers may turn out be a real game-changer for the state’s farmers, offering them a new economic outlet while at the same time conserving the environment.

Worldwide Fund for Nature India (WWF India) is working closely with a major Ludhiana manufacturer and supplier of Swedish multinational IKEA to use rice straw as an energy feeder in boilers. The company currently uses pellets made of groundnut shell and wood chips for feeding in boilers.

However, the supply of groundnut shells is erratic and expensive while wood chips are voluminous and come with high moisture levels. Rice straw, on the other hand, is abundant and plenty but needs to be densified, states Baljeet Gill, Procurement Head of Jawandsons, which supplies textiles to IKEA. He added,

We have undertaken testing of rice straw samples provided by WWF India and found that the calorific value of the straw almost matches with the other two raw materials. We are working with a boiler manufacturing company to test the techno-commercial feasibility of using rice straw in boilers and, if successful, it will open up an income generating source for Punjab’s farmers.

Resham Singh of Mehma Sarkari village near Bhatinda is one of the first farmers to benefit from this new initiative. “With the help of a baler, I made about 200 bales of paddy straw for which I received almost Rs. 4,000,” he disclosed.

Similarly, Ishwar Chand of Mandali village in Mansa district has been able to dispose of his rice straw satisfactorily without polluting the environment. He said,

In a bid to check stubble burning, the Punjab government recently announced an 80 per cent subsidy on the purchase of happy seeders. These are tractor-mounted machines that cut straw, sow wheat and deposit the straw over the sown area as mulch. There is no need to clean the field or burn stubble after using the combine machine, but it has few takers.

However, most of the cooperative societies don’t have funds to buy the machines even after the huge subsidy, Jasbir Singh pointed out. He also said,

Farmers cannot afford such costly equipment. Another problem is that many of us do not have balers so it is difficult to clear our fields. Hiring of labour to clear the fields is another added cost.

Many farmers are also skeptical about the happy seeder as they feel the new crops will not grow properly unless paddy straw is completely cleared from the fields. “The window for sowing has been reduced by the state government and we need more time to prepare the land for wheat cultivation. Thus, we have no option but to burn the stubble,” said Shamsher Singh, also of Harraipur village.

Kanwaljit of Tata Trusts, WWF India’s partner in the project, dismissed such arguments. “The farmers must change their mindsets. The state government gave the directive for delayed sowing because of water shortage and paddy requires a lot of water. The delay has been called to coincide with the rains so that groundwater is not unnecessarily wasted,” he explains.

Under the project, the rice straw pellets are being sold to a boiler manufacturing company, A2P (Agri to Power), situated on the outskirts of Ludhiana. Co-founder Sukhmeet Singh says they are working with farmers at three levels – during pre-harvest for straw collection by mapping fields with the dates of harvest; during harvest for buying baled straw and storing them in stockyards; and post-harvest for manufacturing and sale of pellets for energy generation.

There are almost 5,000 small to large textile and home furnishing industries in Punjab. The results of the pilot project can be communicated as an immediate step for these industries to adopt such responsible and cost-efficient practices.

India produces 500-550 million tonnes of crop residue every year, with Punjab, Haryana and Uttar Pradesh being the highest producers.

In Leh, Tree Plantation Drive To Stem Spike In Pollution