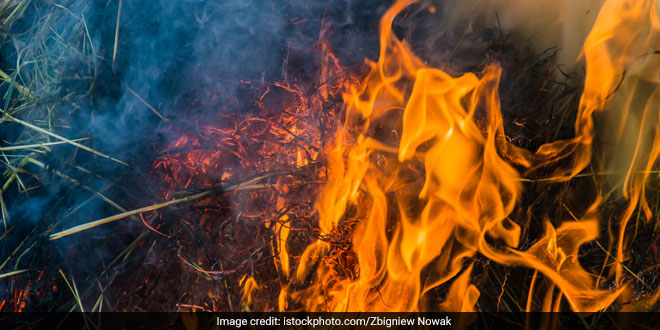 New Delhi: Burning of crop residue, a common practice by Punjab and Haryana farmers, leads to an estimated economic loss of over $30 billion annually, besides being a leading risk factor for acute respiratory infection, especially among children, researchers said on Monday (March 4). The study at the International Food Policy Research Institute (IFPRI) and its partner institutes estimated the economic cost of exposure to air pollution from crop residue burning at $30 billion, or nearly Rs. 2 lakh crore annually, for the three northern states of Punjab, Haryana and Delhi.

In five years, the economic loss due to burning of crop residue and firecrackers is estimated to be $190 billion, or nearly 1.7 per cent of India’s gross domestic product.

Smoke from the burning of agricultural crop residue by farmers in Haryana and Punjab contributes to Delhi’s poor air, increasing the risk of acute respiratory infection by three-fold for those living in districts with intense crop burning.

It will be published in the upcoming edition of the International Journal of Epidemiology.

The study used NASA satellite data on fire activity to estimate the health impact of living in areas with intense crop burning by comparing them with areas not affected by crop residue burning.

The researchers observed that as crop burning increased in Haryana, respiratory health worsened.

Health was measured by the frequency of reported hospital visits for acute respiratory infection symptoms. They also examined other factors that could contribute to poor respiratory health such as burning firecracker during Diwali (it usually coincides with the time of crop residue burning) and motor vehicle density.

In fact, economic losses owing to exposure to air pollution from firecracker burning are estimated to be around $7 billion, or nearly Rs 50,000 crore a year.

Severe air pollution during winter months in northern India has led to a public health emergency. Crop burning will add to pollution and increase healthcare costs over time if immediate steps are not taken to reverse the situation. The negative health effects of crop burning will also lower the productivity of residents and may lead to long-term adverse impacts on the economy and health, said Suman Chakrabarti.

“Our study shows that it is not only the residents of Delhi, but also the women, children and men of rural Haryana who are the first victims of crop residue burning,” Mr Kishore added.

Crop burning is a widespread global practice and in India, it is concentrated in northwest India, though has spread to other regions of the country in the past decade as new crop harvesting technology is adopted.

Farmers try to maximize their yields by planting the next crop as soon as possible after the previous crop has been harvested (generally wheat after rice).

To quickly clear the field for the next crop, they burn the leftover stubble rather than using the traditional method of clearing it by hand.

India To Generate Over 5 Million Tonnes Of E-Waste Next Year: ASSOCHAM-Ernst and Young Study