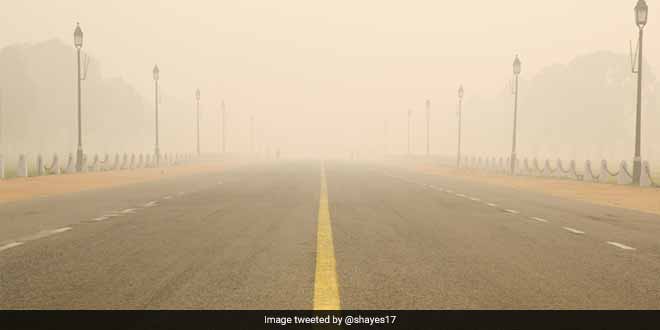 New Delhi: After a day’s breather, the air quality of Delhi-NCR worsened again on Friday, owing to drop in temperature, rise in wind speed and increase in humidity. The air quality of Delhi-NCR is, however, still better than what it use to be 48 hours back, due to change in the direction of wind from Wednesday onwards, thereby barring the effluents being carried from Punjab and Haryana where stubble burning continues.

Pointing to stubble burning in neighbouring states, the minister urged the citizens to take all steps to minimise the their contribution to the bad air by using public transport and keeping a close watch on burning of garbage.

Agricultural residue burning has been observed in Punjab and Haryana. However, the wind direction towards Delhi is not from these states, as currently winds are coming from Uttar Pradesh and adjoining Madhya Pradesh, the minister said.

According to a government statement on Friday, the air quality in the capital has been “very poor” since October 17.

The national capital on Friday recorded the Air Quality Index (AQI) at 331 units, against 311 on Thursday and 355 on Wednesday, according to the Central Pollution Control Board (CPCB) data.

Several places in Delhi-NCR, where air-quality improved from “severe” to “very poor” on Thursday, slipped back in the “severe” category.

Existing air condition in Delhi is induced due to localised sources and sources situated in the NCR region. This fact is evident as values observed in NCR are higher than the values in Delhi, Minister Hussain said.

Air quality in Haryana’s Faridabad reverted to “very poor” on Friday with AQI at 344, against 82 or “satisfactory” on Thursday.

In Delhi, the major pollutant PM2.5, or particles with diameter less than 2.5mm, saw a rise, with average volume recorded 337 units till 7 p.m, while in Delhi-NCR the combined average of PM2.5 was 331 units on Friday.

The average PM2.5 on Thursday in Delhi was 280 units, based on the results from 16 different stations.

The Delhi Technical University (DTU) in north Delhi on Friday turned out to be the most polluted location, with a “severe” level of AQI at 407 units.

Dilshad Garded in east Delhi offered the most clean air on the day, with a “moderate” AQI, followed by Pusa in central Delhi where AQI was at “poor” level — the second-most clean air in Delhi.

Safe limit for PM2.5 is 60 (microgrammes per cubic metre) as per national standards and 25 globally.

The winds are still south-easterly as against north-westerly, which were earlier coming from Punjab and Haryana. The temperature has however dropped and humidity has also increased in the past 24 hours, Mahesh Palwat, Director of private weather forecasting agency Skymet, told IANS.