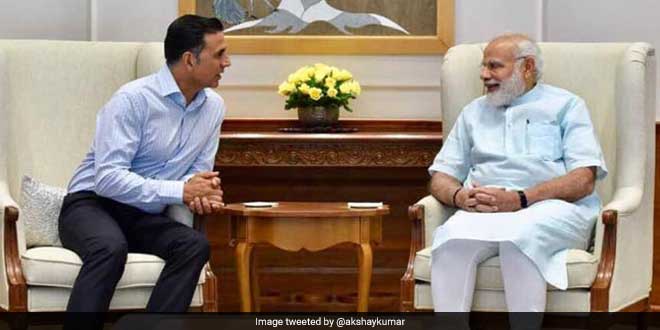 Actor Akshay Kumar who is all set to spread the message of go open defecation free in his next release – Toilet-Ek Prem Katha met, Prime Minister Narendra Modi in the capital today. They discussed the movie’s theme which talks about the importance of having a toilet at home, the primary message of Swachh Bharat Abhiyan. Expressing his pleasure on meeting the Prime Minister, the actor took to social media and posted a picture.

“Met PM @narendramodi and got the opportunity to tell him about my upcoming ‘Toilet-Ek Prem Katha.’ His smile at just the title made my day!” wrote the National award winner.

Met PM @narendramodi and got the opportunity to tell him about my upcoming 'Toilet-Ek Prem Katha.' His smile at just the title made my day! pic.twitter.com/qbvYrlbM2Y

In response PM Modi gave his best wishes to the actor, “Happy to have met. My best wishes.”

Happy to have met. My best wishes. https://t.co/BViBAnEdq9

A few months back the ‘Rustom’ star had revealed his movie poster in a very unique way which caught everyone’s attention. The actor posted a picture of himself and co-star Bhumi Pednekar alongside a toilet from the set of the movie.

A very good morning from @psbhumi and me from the sets of Toilet – Ek Prem Katha! First day it is…need your best wishes ???????? pic.twitter.com/ouumNwfl1A

In another movie still the actor hinted about the movie carrying the message of Right to Cleanliness. He spoke about ‘Swachh Azadi’ wherein he termed the story as an ‘unusual love story’.

“Pleased to share, @ToiletTheFilm an unusual love story will be with you on 11th Aug, 2017. Tayyar ho jayye Swachch Azaadi ke liye.”

Pleased to share, @ToiletTheFilm an unusual love story will be with you on 11th Aug, 2017. Tayyar ho jayye Swachch Azaadi ke liye! pic.twitter.com/EEb5bOySu0

Toilet-Ek Prem Katha is a social satire and is directed by Shree Narayan Singh. It is all set to hit the theatres on August 11.