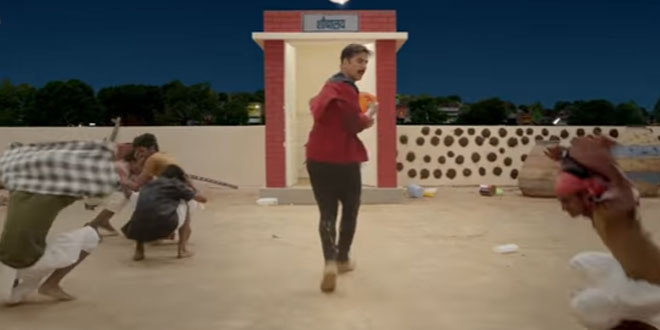 New Delhi: “The world has reached Mars, we are living in the 3D era and thousands have climbed the Everest, it is high time we do ‘toilet ka jugad’,” says the opening lines of a new song from the upcoming movie Toilet – Ek Prem Katha starring Akshay Kumar and Bhumi Pednekar. The song cum a toilet anthem highlights the issue of defecating in the open and urges people to build toilets at home. Highlighting the trauma women face due to of lack of toilets and defecating in the open, the song raises several questions relating to their dignity, “Our culture has always taught us to consider women as the honour of the household, so what happens to this dignity when women are forced to relieve themselves in the open?” Sung by the lead actor of the movie, Akshay Kumar himself, the song goes on to question the lack of privacy for women when they are forced to go out into the open due to no access to toilets. The song also urges strict action against men defecating in open.

Apart from being a catchy number, the song also aims to be educative, as it gives out hard hitting facts about open defecation, like  ‘54% of India still defecates in open, ‘millions of women risk getting raped everyday’ and ‘2 lakh children die each year because of infection from open defecation’.

Directed by Shree Narayan Singh, Toilet: Ek Prem Katha is slated to release on August 11. With #ToiletKaJugaad trending, people on twitter by and large appreciated the intent of the anthem, but some sceptics pointed out that large section of the population has no food to eat then how can toilets be a priority? Here are some reactions to the song:

#ToiletKaJugaad is a very relevant message conveyed in a very entertaining way. @akshaykumar continues to engage India with his movies!

Congrats! on making very bold film! We need very wide & open debate on the issue. What? How? When? Where? Why? ????@akshaykumar #ToiletKaJugaad