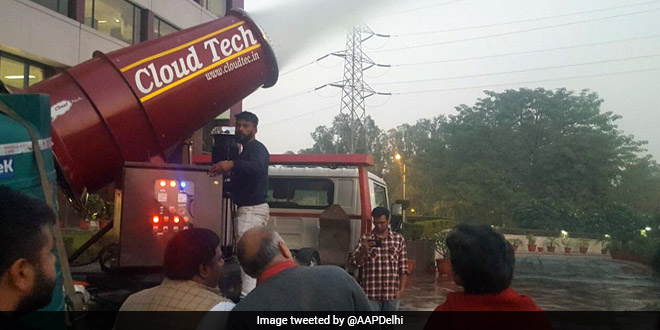 New Delhi: To combat the pollution crisis in the national capital, the Delhi government on December 20 conducted a trial run of an “anti-smog gun”, a machine that sprays atomized water into the air. The fine water particles work like rain, sticking to the deadly particulate matter suspended in the air and bringing them down. The device, shaped like a hair dryer and mounted on a flatbed diesel truck, was tested in the Anand Vihar area of New Delhi. The experiment with anti-smog guns to control air pollution, however, has failed the test of Central Pollution Control Board (CPCB), which has declared the machine ineffective in open areas and on fine particles, especially PM 2.5 and PM 10. The CPCB also observed that even to control dust, it would take at least 50,000 such machines to control bigger particles in the air across Delhi, which has an area of 1,484 sq.km

This system can’t be applied in an area like Delhi. It can only work in a confined area like a stadium and not in open areas, said D. Saha, scientist at the CPCB who observed the experiment at Anand Vihar on December 20.

The anti-smog gun typically uses 30 to 100 litres of water in a minute. And, it aims at settling dust and the fine particles in a limited radius of 25 to 50 meters with the water spray – a typical 0.03 sq.km at its peak efficiency.

The CPCB observed that the machine, essentially a water scrubber, was suitable only for controlling industrial dust in mining, grinding, coal or mineral handling and stone crushers. The unconfined ambient air laden with lesser dust, compared to industrial fugitive location, might not get a chance to get adhered with tiny and submicron particles in a given time, felt two CPCB scientists Saha and Abhijit Pathak. 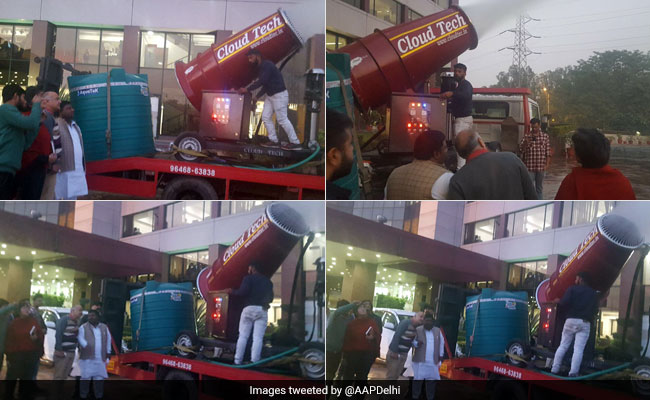 The scientists further said that the water droplets from the device would stay in the air for lesser time than the pollutant of same size, thus the area of impact would result only in the form of a “wet-surface”.

On December 20, the data from Delhi Pollution Control Committee (DPCC) showed no change in the major pollutant PM2.5 and PM10, or particles in the air with diameter less than 2.5 and 10 micrometers, though the manufacturers of the anti-smog gun claim that the machine aims at controlling PM2.5 and PM 10 pollutants.