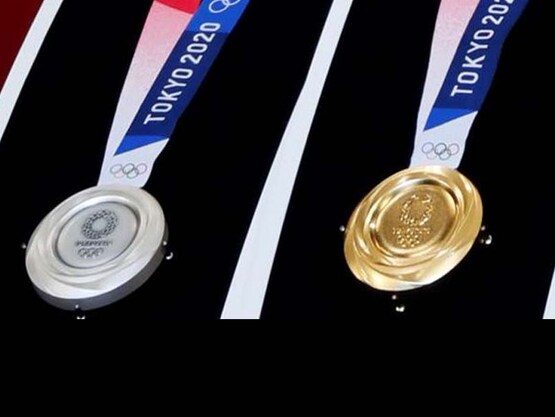 New Delhi: On Wednesday, to mark a year’s countdown to Tokyo 2020 Olympics, the organisers unveiled the design of the medals that will be made using electronic waste. According to the official site of the Tokyo 2020 Medal Project, nearly 80,000 tons of mobile phones and small electronic devices around Japan was collected in two years’ time, which will be further used in the crafting gold, silver and bronze Olympic and Paralympic medal at next year’s games. Roughly, around 5,000 medals will be given out that will weigh in at between 556 and 450 grams each and will be manufactured from metal extracted from mobile phones and other small electronics donated by the Japanese public as part of a campaign to make Tokyo 2020 eco-friendly.

Tokyo 2020 organisers believe that the medals symbolize the energy of athletes, as well as the diversity of the games. It also represents Japanese culture, with the ribbon showing off modernized ichimatsu moyo (checkered patterns) and kasane no irome (kimono layering techniques). The Tokyo 2020 colors are also added to the ribbon through co2-friendly chemically-recycled polyester fibers. Sharing details about the project, the official statement from Tokyo 2020 organisers said,

As a result of the two-year donation drive, Tokyo 2020 Olympics medals completely will be made using recycled electronics items. Through this project, we aim to recycle a small amount of electronic waste in an effective manner and contribute to an environmentally friendly and sustainable society and hope that the same message will spread in the entire world.

Also Read: India To Generate Over 5 Million Tonnes Of E-Waste Next Year: ASSOCHAM-Ernst and Young Study

There Has Been Reduction In Incidents Of Paddy Residue Burning By Farmers, Says Agriculture Minister Narendra Singh Tomar