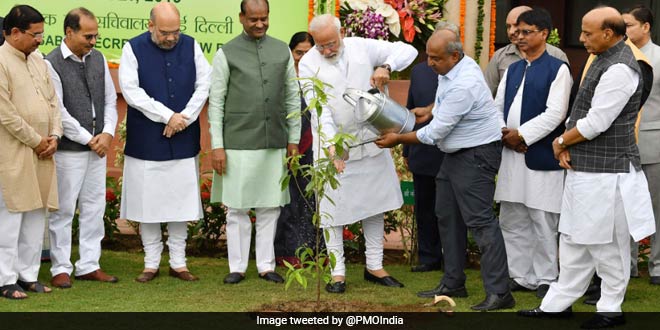 New Delhi: “Plantation in the devastating conditions such as natural imbalance, pollution and climate change, is a divine message that can compensate for the natural life cycle,” tweeted the official account of the Lok Sabha Speaker, Om Birla, as he organised a tree plantation campaign at the Parliament premises. Mr. Birla was joined by the Prime Minister Narendra Modi in addition to Home Minister Amit Shah, Defence Minister Rajnath Singh and Minister of Environment, Forest and Climate Change, Prakash Javadekar, among other prominent political leaders from BJP, as they planted saplings.

PM Modi too planted a sapling as his official Twitter account shared images from the event, it further read,

Mr. Birla, on the occasion thanked PM Modi and other leaders who helped him take the green initiative forwards, he said,

The speaker also expressed his desire of making the country an example of healthy living and rich-green environment.

Whenever people think of a green environment, India should be the country which comes in their minds, he said.

This is not the first time Mr. Birla organised a a programme to promote clean and green living as last week he organised a two-day long special cleanliness drive in the Parliament House campus. The drive was also joined by various Members of Parliament (MPs), as he directed them to work towards taking the zeal of Swachh Bharat Mission to each village of the country.

Around The World: Tokyo 2020 Olympics To Promote The Message Of Sustainability, Unveils Medals Made Using Electronic Waste

100 Electric Vehicles Charging Stations To Come Up In Noida, Soon