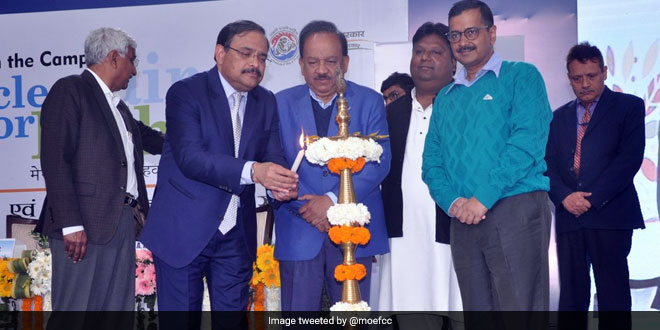 New Delhi: Delhi’s poor air quality has finally brought the Ministry of Environment and Forests and Delhi government together to tackle the city’s air pollution. On February 10, the ‘Clean Air For Delhi’ campaign was launched by Union Minister for Environment Dr Harsh Vardhan and Delhi Chief Minister Arvind Kejriwal. The 15-day campaign will include multiple awareness drives and interactions with necessary stakeholders to tackle the issue of air pollution in Delhi. 70 teams comprising officials from the Central Pollution Control Board (CPCB), Delhi Pollution Control Committee (DPCC), the municipalities of Delhi, Delhi Police and NGOs working in the field of air pollution will participate actively in the campaign.

Throughout the 15 days of the campaign, workshops will be held across the city on air quality monitoring, measuring the pollution levels of vehicles and individual contribution towards cleaner air. The Central government has roped in experts from academic circles who will be present in the workshops, explaining air pollution and methods to tackle it.

Speaking at the launch of the campaign, Dr Harsh Vardhan said that improvement of air quality is the responsibility of every individual.

Though the campaign’s duration is that of 15 days, people must transform the Clean Air For Delhi campaign into a national and social movement for other cities facing similar pollution concerns to take inspiration from.

Each team formed for the duration of the campaign will comprise one official from the Ministry of Environment, one official from the Delhi government, one member from CPCB and DPCC respectively, and one member from the concerned municipal corporation. These teams will take stock of air quality across pockets of the city and report on the levels of pollution. They will also report on factors which contribute towards increased air pollution in different parts of the city, as vehicular pollution could be the cause for poor air quality in one part of the city, while construction debris maybe the cause in another region. The teams will also encourage Resident Welfare Associations (RWAs) to plant saplings in open areas, and request schools and colleges to increase their green cover.

#CleanAirForDelhi The Campaign will also include interactions with Non-Government Organisations (NGOs), civil society citizens, academic and R&D institutions. A workshop on vehicular pollution and traffic management will also be held. pic.twitter.com/mTfb68fzMe

In coming days, the Delhi government looks forward to working together with all Central Ministries to ensure that Delhi’s environment remains clean and green, said Chief Minister Arvind Kejriwal.

The occasion also witnessed the launch of Central Pollution Control Board’s ‘Clean Air Campaign’ app. The app, which is available on Google Playstore, allows a user to register a complaint about poor air quality in a particular area and track the progress of action taken on the basis of the complaint.

The coming together of Delhi government and the Centre to tackle air pollution is definitely a landmark step in the collective fight against the crisis. Formation of teams to check air pollution throughout Delhi is a concept that will yield long term results as area specific reasons will finally be identified and worked upon. Though Delhi’s air pollution crisis will take a long time to be resolved, this is definitely a positive step, said Ashish Jain, Director, Indian Pollution Control Association.

Delhi’s Air Quality Index (AQI) remains at an unhealthy 320, signifying nearly nil improvement from the situation two months ago. With the launch of the Clean Air for Delhi campaign, an inclusive movement has begun which asks for participation from all quarters to improve the capital’s air quality. It will now be up to the teams and individuals across Delhi to ensure that the campaign is a success, and is sustained throughout the year.