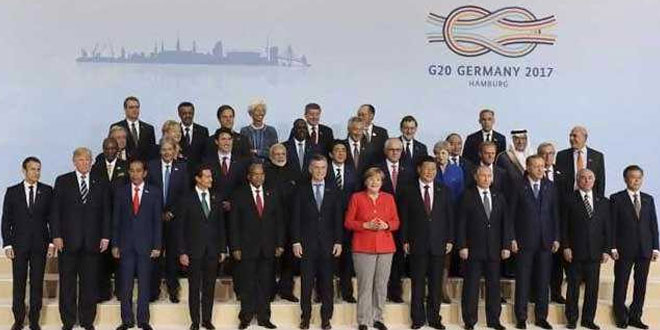 Global economic growth, tackling worldwide environmental degradation and improving financial status of the world’s most economically powerful nations were some of the crucial topics touched upon in the recently concluded G20 summit, held on July 7 to 8 at Hamburg, Germany. The Group of Twenty or G20 as it is popularly known, comprises twenty major global economies, including India, and meet annually to discuss issues of global importance. This year’s G20 summit saw the twenty nations pledging to tackle the problem of marine litter, a dire threat to both the environment, and marine ecology.

In a report titled ‘The New Plastics Economy,’ published by the World Economic Forum in 2016, it was estimated that 150 million tonnes of plastic debris is in the ocean. The staggering number results in the death of nearly 1,00,000 sea animals annually, showing how threatening marine litter could be. Marine litter is a problem affecting nations across the world, and this year’s G20 summit saw the passage of a resolution which reasserted its commitment to initiate measures in preventing and reducing marine litter across oceans. The summit also cited United Nation Environment Programme’s (UNEP) report on marine plastic debris and microplastics to inspire a collective fight against the rising threat of marine litter.

In asserting its commitment towards preventing and reducing marine litter, the G20 announced a string of new initiatives to be implemented to meet the 2030 Agenda for Sustainable Development, which includes tackling marine litter. The G20 Operational Framework pointed out issues to be addressed to tackle marine litter, while maintaining that there was not a singular solution to the problem. The framework stressed on addressing both land and sea based sources of pollution, addressing the cost required to tackle marine litter on a global scale, especially developing new sources of funding to effective waste management. The framework also asked G20 nations to encourage funding and research to study the problem of marine litter better. 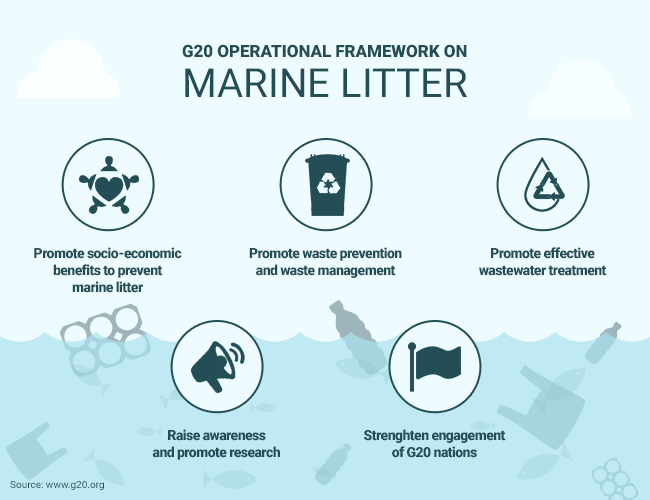 The summit put forward a few policy measures which could be undertaken by G20 nations to prevent marine litter and its careless disposal in oceans. It acknowledged the importance of promoting socio-economic benefits or reducing and preventing marine litter. Steps such as promotion of eco-tourism, sustainable fisheries and wastewater management would ensure that litter generation is minimised, while economic benefits are generated. The summit laid stress on reducing, reusing and recycling waste, instead of disposing it in seas. One of the major problems in many of the world’s most polluted ocean areas is the lack of proper waste collection and processing mechanism. The framework pointed out that in G20 countries which had ocean areas with high level of pollution, regulatory frameworks must be put up to promote sustainable waste management. The framework also asked for stakeholders, including G20 partners to continue communication about the issue of marine litter, and cooperate wherever necessary.

Despite a plethora of conventions, programmes and initiatives, marine litter remains a global issue which is yet to be addressed on a global scale. India’s record with marine litter hasn’t been very good either. 0.6 million metric tonnes of plastic is dumped annually by India into oceans, ranking us among the top 20 countries responsible for the global marine litter crisis.

However, a bright spot for India has been the work undertaken by environmental activist Afroz Shah, whose initiative to clean the Versova beach in Mumbai was hailed by the United Nation itself. Mr Shah continues to be a global inspiration in the fight againplastic polst marine litter and his photograph was tweeted by United Nations Environment chief Erik Solheim. Mr Solheim himself had visited Versova beach in September 2016 and participated in the beach cleanup programme. During G20, Solheim tweeted a photograph of Mr Shah as he continued with his regular beach cleanup programme with a band of 150 volunteers.

The action plan to counter marine litter has a comprehensive approach as it sets objectives to counter marine littering by encouraging sustainable waste management, which would also contribute to economic development of ocean areas. The stress on encouraging research in reducing marine litter will also be beneficial as it could pave the way for the development of new strategies that can efficiently address the problem of marine pollution. However, the G20 nations will also have to engage in strategic cooperation among themselves to ensure that all the policy measures are adopted to tackle marine litter effectively and efficiently.