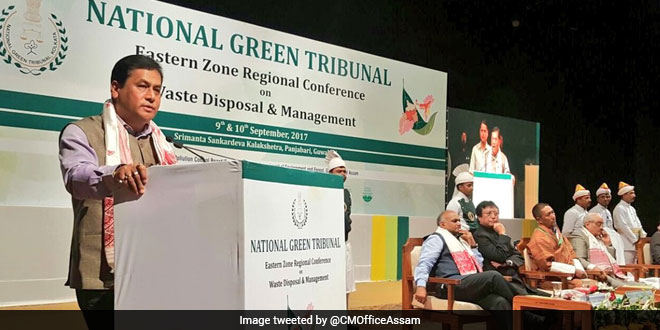 Guwahati: Assam government will set up an institute and a separate department to look into waste disposal and management, Chief Minister Sarbananda Sonowal said.

As Guwahati aims to become the hub of economic and tourism activities in the next few years, our government would strive to ensure that ecology and economy co-exist.

We want to take Assam into high growth trajectory and usher in fast development but not at the cost of the environment, Chief Minister Sonowal said at a conference organised by the National Green Tribunal here.

He said the state government would set up an Assam Institute of Waste Management and another separate department to oversee waste disposal.

The chief minister said the entire country is grappling with the problem of huge buildup of waste and its hazardous impact on the environment, and the situation calls for smart handling of waste, including processing and recycling as per the latest technology.

Chief Minister Sonowal also said his government has taken an initiative to plant 10 crore sapling to increase the green cover in the state and boost the ecology.

Govt is running a campaign for planting 10 crore saplings across the State. Also Assam Institute of Waste Management will be set up: CM.

Pointing out that Assam is blessed with abundant natural resources, he said the perennial problem of flooding in the state must be managed scientifically, and a collective approach of all the North East states and Bhutan is needed to find a concrete solution.

National Green Tribunal Imposes A Fine Of Rs 25,000 On Delhi Technological University Over Failure To Devise A Waste Management Mechanism