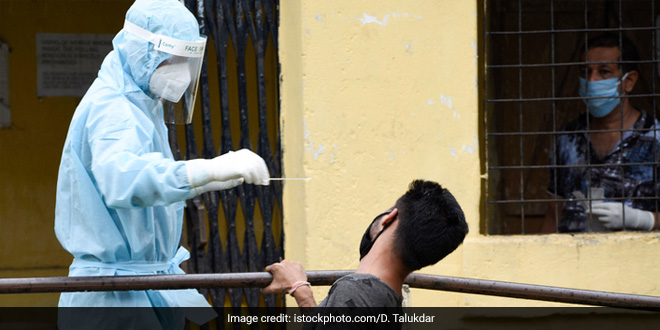 New Delhi: In an effort to gauge the prevalence of the SARS-CoV-2 virus and the COVID-19 disease in Assam, a sero-prevalence study has been initiated in nine of the state’s 33 districts. On Sunday (August 23), SRIJANASOM, a Delhi based non-governmental organisation, working to promote Indian art and culture, provide services for education to the underprivileged in the society and bring in an accessible health care system is conducting a serological survey study in Assam in association with Medicity Guwahati Group of Clinic and Diagnostics. The study titled ‘A.A.S.H.A – Assessment of Anti-SARS-CoV-2 among the Habitants of Assam – A population based cross-sectional study’ will be completed in two months’ time.

According to Mridusmita Das, CEO and Managing Trustee of SRIJANASOM, the sero-prevalence study in Assam has received Ethical Clearance from Ethics Committee of Assam DownTown University and a no-objection certificate from the National Health Mission of the state. The study will be conducted as per the guidelines of the Indian Council of Medical Research (ICMR). Following ICMR’s advice, researchers will conduct sero-survey using IgG Elisa test kit.

The idea of a sero-survey in Assam was conceptualised by IRS (Indian Revenue Service) officer Padmapani Bora, Deputy Secretary to the Government of India. As part of his service to the nation, Mr Bora has been involved in manufacturing of personal protective equipment (PPE). Talking about the birth of the idea, Mr Bora said

While working only I realised the severity of the COVID-19 situation. I always wanted to do something so I thought let’s initiate a sero-survey after all it is a scientific approach to know the exposure of COVID. I explored my network and got together NGO, doctors, and facilitated the process.

On the basis of the cases per million population, the 33 districts of the state have been divided into three categories – high risk, medium risk, and low risk. For the survey, three districts from each category have been selected. The sample size will vary from district to district.

Though the samples will be collected randomly, we plan to target asymptomatic patients. The samples will also be collected from paramilitary forces, police officials, health workers, banking segment, administrative officers and other groups, said Dr. Khalil Siddique, Chairman, Medicity Guwahati Group of Clinic and Diagnostics.

Dr. Jyotismita Pathak, Assistant Professor at Army College Of Medical Sciences in Delhi, will carry out the analysis of the study. According to Dr. Pathak, the findings will highlight the status of COVID-19 in Assam in the last week of July or the first week of August.

Blood serum of a group of individuals is tested to see if they had COVID-19 in the past. For the sero-survey, antibody test, also known as a serology test is done. It determines whether the human body has been exposed to the Coronavirus in the past and now has antibodies to fight against the virus. It examines if an individual’s immune system – body’s defence against illness – has responded to the infection.

The antibody test examines the presence of these antibodies. There are two kinds of antibodies – IgM (Immunoglobulin M) and IgG (Immunoglobulin G). Explaining the two and how they help in detecting COVID-19, in a media briefing, Dr S.K. Singh, Director of National Centre for Disease Control (NCDC), had said,

IgM antibody indicates the presence of active COVID-19 infection and starts getting positive after a week of contracting the virus. But since IgM disappears soon, it does not give a clear picture of total exposure. On the other hand, IgG antibody develops after two weeks of the onset of the infection and remains in the body for a sustained and longer period.

Also Read: Coronavirus Outbreak Explained: What Is Antibody Test And What Role Does It Play In The Fight Against COVID-19?

What Is The Role Of Sero-survey On A City, State And National Level?

In layman’s terminology, sero-survey examines how many people in a population have been infected with COVID-19 and recovered from the same. Explaining the role of sero-survey through an example, Dr. Pathak said,

Iceberg has a visible section which floats above the waterline however, there is a larger, invisible section sub-merged in the water. Similarly, in the case of any infectious disease, we get to know about the cases that are reported; like, the COVID-19 numbers you see on state and national health portal. But there are cases that don’t come to notice for various reasons – they are asymptomatic, or people didn’t report. So, a sero-survey focusses on that sub-merged portion of the iceberg and tells us what the infection to case ratio is.

Dr. Khalil Siddique also said that the reported COVID-19 cases are a tip of the iceberg and added,

To fight COVID-19, experts are also talking about developing herd immunity – a uniform amount of immunity that at least 60 per cent of the population in a community must develop to slow down the spread of infection. According to Dr. Pathak, a sero-survey also helps in knowing what percentage of a population has developed immunity against the virus and how far are we from herd immunity.

The risk is not acceptable, said Catherine Bennett, epidemiology chair in the Faculty of Health at Melbourne’s Deakin University, as quoted by a news agency Reuters. We can’t afford to have people infected to reach herd immunity when we know so little about the longer-term effects.

Normally, when we talk about herd immunity, we talk about using the vaccine as well, it means, we still need to think of how many people we need to vaccinate in terms of achieving the herd immunity so that the other half is safe and it depends on the country to country, based on its population.

Also Read: COVID Fighters: Over 300 Healthcare Workers In Assam Queued Up To Donate Plasma To Save More Lives

Dr Maria Van Kerkhove also informed that WHO is part of many sero-studies being done in 50 countries across the world and most of the studies done so far show that less than 10 per cent of the population have SARS antibodies in them. This means, a substantial share of large population remains susceptible to the virus and precautionary measures need to be followed.

This may also provide us an opportunity to raise awareness regarding plasma donation by immune individuals, which is considered for therapy of severe cases of COVID 19, said Mridusmita Das, CEO and Managing Trustee of SRIJANASOM.

According to the team, the findings of sero-survey might also help the government in taking policy decisions and chalking out a plan on opening up. Elaborating on the same, Ms Das said,

To contain the spread of COVID-19, various measures are being taken like weekend lockdown. Based on the findings of the survey, Assam government can decide on whether to continue with weekend lockdowns or not. Or which district has a high number of asymptomatic patients and needs more attention.

Recently, the findings of sero-surveys conducted in Delhi, Mumbai and Pune were released. In Delhi, two rounds of surveys have been completed and to keep a check on how many people have been infected, the government plans to conduct sero-surveillance every month.

The first round of the sero-survey was carried out by the National Centre for Disease Control (NCDC) in collaboration with the government of Delhi from June 27 to July 10. According to the survey, a large number of infected people remain asymptomatic. The survey done to assess the prevalence of SARS-CoV-2 in the national capital studied 21,387 samples collected from all 11 districts of Delhi. The study found 22.86 per cent prevalence of COVID-19 infection in Delhi.

Under the second round of study conducted from August 1 to August 5, 29.1 per cent of the people surveyed were found to have been exposed to the coronavirus.

In July, a similar study was done in three wards in Mumbai, covering nearly 7,000 people. It found that one in six or about 16 per cent of those surveyed in the city had contracted the highly contagious novel coronavirus. Whereas, in slum areas, where lakhs of people live in cramped spaces usually sharing toilets, the number is a whopping 57 per cent.

Talking about the survey and its findings, Dr Ullas S Kolthur from the Tata Institute of Fundamental Research (TIFR), which conducted the survey along with Brihanmumbai Municipal Corporation (BMC) and NITI Aayog said,

The results of the survey are definitely encouraging if we take the findings in context, it is a possibility that sooner or later Mumbai slums will reach to herd immunity, as about 57 per cent people surveyed have got infected.

A survey conducted in five highly-COVID-19 affected areas of Pune city found that there has been an extensive spread of infection in the five wards, with the seroprevalence ranging from 36.1 per cent to 65.4 per cent. Just like Mumbai, Pune also saw similar results – high sero-positivity (56-62 per cent) for people living in slums or tenements, and 43.9 per cent for bungalow residents, and 33 per cent for those staying in buildings.

The findings of sero-survey in Assam will help establish if the same trends continue or there is a divergence.

Also Read: Here’s What You Should Know About Pune’s Sero-Survey Result

Related Topics:
Assam Coronavirus
Up Next