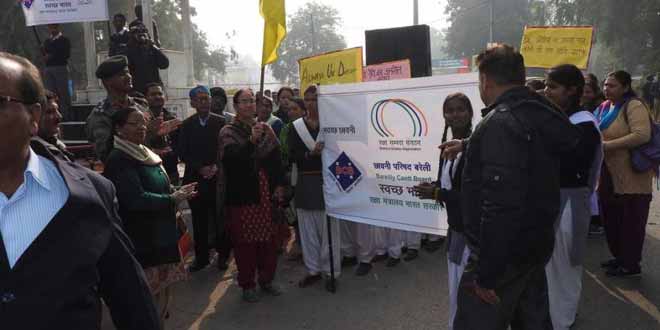 From cutting power and water supply if toilets are not built in a Telangana village to cancellation of firearms licenses in Bundelkhand, and police being roped in Kota in Rajasthan,  convincing people to end defecating in the open, build and use toilets is not an easy task, it seems. To ensure that open defecation becomes a practice of the past, the Bareilly Municipal Corporation (BMC) has begun a ‘Roko-Toko’ campaign, which will go on for three days from October 29 to 31. Under the campaign, civic body officials will be patrolling different areas of the city and anyone found defecating in the open will be caught, warned and then as a repeat offender, will be fined.

The municipal corporation has been inspired by the campaign of the same name in Indore, where the local municipal body had formed ‘dibba gangs’ comprising mostly school children. On spotting anyone defecating in open, the gang would start banging metal boxes or ‘dibbas’ loudly. While the Bareilly campaign has not roped in school children yet, the inspiration behind beginning a campaign which shames those who defecate in the open, is the Indore campaign and its success.

When we read about the campaign in Indore, we thought that something similar can be organised here as well. We have considerable number of municipal officers who go on rounds throughout the city to check whether people are defecating in the open or not. We have identified some zones where the open defecation percentage is higher and more officers have been deployed to catch hold of anyone who defecates openly, said Rajesh Kumar Srivastav, Municipal Commissioner, Bareilly.

Out of 70 wards in Bareilly, 51 have been declared open defecation free (ODF). The municipal corporation however, is concerned about the continuing number of people defecating in the open. In the rest of the 19 wards, the number is significantly higher and that has prompted the civic body to begin this campaign.

This campaign is also a chance for civic officials to sensitise people about open defecation and associated evils. Those who get caught will have their names recorded. If the same set of people are caught openly defecating again, fines ranging from Rs 500 to Rs 5,000 will be imposed, said Mr Srivastav.

The civic body has set an internal deadline of December 2017 to declare all 70 wards ODF. The problem areas of the city include areas around the railway tracks and some of the older parts of the city where slums are in abundance. The civic body has committed to build public toilets every 500 metres in such areas to ensure that there is no open defecation in such areas. The municipality has also confirmed that the campaign will be restarted if the sensitisation idea needs to be implemented effectively. The effectiveness of the campaign will only be realised in December, but the launching of the campaign is a well thought out step on behalf of the municipality.

Mizoram Enforces Complete Ban On Sale, Bursting And Import Of Firecrackers During Christmas And New Year To Combat Air Pollution