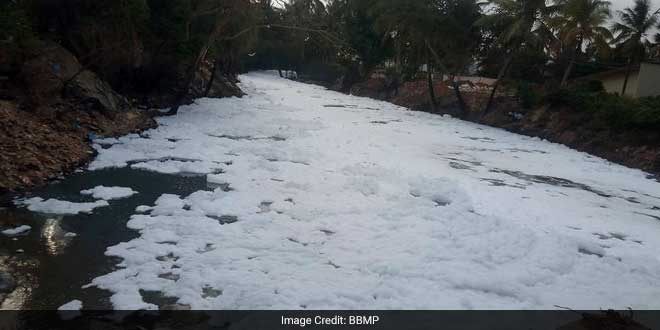 Bengaluru: The Karnataka State Pollution Control Board (KSPCB) swung into action to clean the Bellandur lake in the city, two days after the National Green Tribunal ordered closure of the polluting industrial units around it in two weeks, said an official on Friday. “We have served closure notice to six industrial units near the lake for discharging effluents into it,” KSPCB Member Secretary S. Shantappa told reporters after a meeting of top officials here.

It has also started identifying the industries letting untreated water and wastage into the 3.6 square kilometre lake in the eastern suburb.

We have issued show-cause notices to about 100 of the 500 industrial units located in the 5km vicinity of the sprawling lake for not complying with safety norms and polluting it with effluents and wastage, said Shantappa.

According to official estimates, a whopping 365 million litres daily of effluents and domestic sewage flow into the lake from hundreds of units engaged in dying, tanning and washing, making garments and chemicals and thousands of houses and apartments through sewage pipes and drains in the area.

We have discussed the measures to be taken to implement the Tribunal order. We hope to results – stopping discharge of effluents and waste into the lake in a week, said Karnataka Lake Conservation and Development Authority CEO G. Vidyasagar after the meeting.

The meeting, chaired by Chief Secretary S.C. Khuntia was attended by the heads of the KSPCB, Bruhat Bengaluru Mahanagara Palike (BBMP), Bengaluru Development Authority (BDA) and the Bengaluru Water Supply and Sewage Board (BWSSB).

The Tribunal bench, headed by Chairman, Justice Swatantar Kumar, also imposed Rs.5 lakh fine on any offender dumping waste into the lake and seal the industries violating its order of April 19.

The bench added that no waste of any kind, either municipal solid or domestic is to be dumped at the buffer zone of the lake.

The tribunal asked the state government, KSPCB, KLCDA and BDA to start cleaning the lake immediately and report back to it in a month.

The Bellandur lake, the largest of the 262 lakes and tanks across the city, receives about 40 per cent of the city’s sewage.