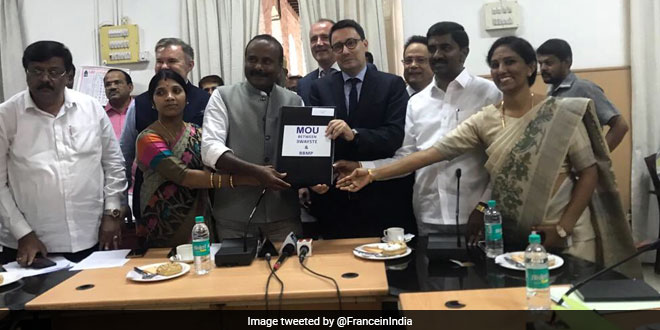 New Delhi: The absence of scientific treatment of waste in India has been a deterrent in the country’s fight against waste management. Of India’s annual production of 64 million tonnes of waste, nearly 70 per cent remains untreated due to lack of scientific infrastructure. The situation is all set to change in Bengaluru, where the city civic body signed a Memorandum of Understanding (MoU) on the occasion of World Environment Day on June 5. The French firm 3Wayste and the Bruhat Bengaluru Mahanagara Palike (BBMP) signed a MoU to conduct a feasibility test on waste management.

As per the MoU, a new waste-to-energy plant with a capacity to treat 500 tonnes of waste daily, will be constructed at Chikkanagamangala, on the city’s outskirts. Speaking about the role played by waste in pollution, Mr Alexandre Ziegler, French Ambassador to India, said that waste also contributes towards air, soil and water pollution, thereby damaging the whole ecosystem. On the organisation 3 Wayste, Mr Ziegler said that the company had vast experience and successes in managing waste and the association will ensure that Bengaluru’s waste problems are addressed with precision.

Though BBMP has taken several initiatives to address Bengaluru’s growing problem of waste, success has been slow and rare for the city’s civic body. A BBMP official said that the transportation cost of Refuse Derived Fuel (RDF) produced in waste management plants situated 600 kms away from Bengaluru, was around Rs 20,000 per truck, not economically viable. As per the MoU, BBMP and bulk waste generators will supply 300 and 200 tonnes of waste to the plant. The investment of the project is expected to be around Rs 250 crore, to be borne by 3 Wayste. The waste treatment plant is also expected to generate seven megawatts of power daily.