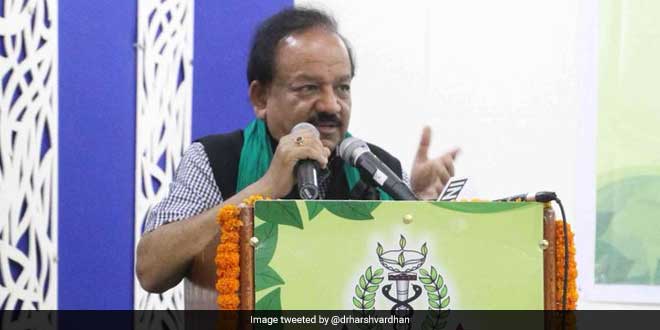 New Delhi: Speaking at a World Environment Day 2018 function hosted by Delhi Medical Association (DMA) on June 6, Union Environment Minister Harsh Vardhan urged the medical fraternity to build a social movement around ‘Green Good Deeds’- an initiative launched by the environment ministry before 45th World Environment Day. The minister appealed to the doctors to join the green movement and make it successful like the Pulse Polio campaign. He said, “The role of doctors was crucial in success of the Pulse Polio campaign and the same is required now for the success of action against environment pollution.”

Inaugurated a seminar on adverse effects of #AirPollution on health, organised by #DelhiMedicalAssociation. Urged medical fraternity to build a social movement around #GreenGoodDeeds, as they have a crucial role to play in this regard. @moefcc, @WEDIndia2018. pic.twitter.com/HrJAIOnXBS

At the event, Delhi Medical Association, through a presentation highlighted the side effects of air pollution, stating that it leads to higher incidence of respiratory illness, chronic obstructive lung disorder and other such problems. The DMA suggested the ways to reduce pollution and protect oneself from the side effects of pollution.

Along with this, to contribute to India’s aim to beat plastic pollution, DMA formed a task force to launch a ‘No Plastic’ campaign. Under the campaign, 3,000 doctors will be administered as ‘green ambassadors’ who will create awareness about environment conservation.

Last but not the least; doctors took an environment pledge to work for a pollution free environment, administered by Dr Harsh Vardhan.

#DMA formed a task force to launch a #NoPlastic campaign. Released a poster on #GreenGoodDeeds, to mark the #WED2018. I administered an #EnvironmentalPledge to the assembly of doctors to work for a pollution-free environment. @moefcc, @WEDIndia2018 pic.twitter.com/hmf47cKyzf

Talking about Green Good Deeds, an initiative by Environment Ministry that urges people to not make World Environment Day a one day affair, where you plant a tree and water it regularly, but do one green good deed regularly and make it sustainable, Dr. Vardhan said, green good initiative has found acceptance by the global community.

He added, we have listed around 700 such small acts that do not need any extra effort or money. An app has also been launched to help people learn about these deeds and follow them.

I was in the 4th BRICS Environment Ministerial in Durban, South Africa, where I had urged the BRICS nations to jointly help in the development of a social movement to fight for the protection and conservation of the environment. The next BRICS Ministerial on Environment has agreed to include “Green Good Deeds” in its official agenda in the next Ministerial in Brazil and another meeting in Russia.