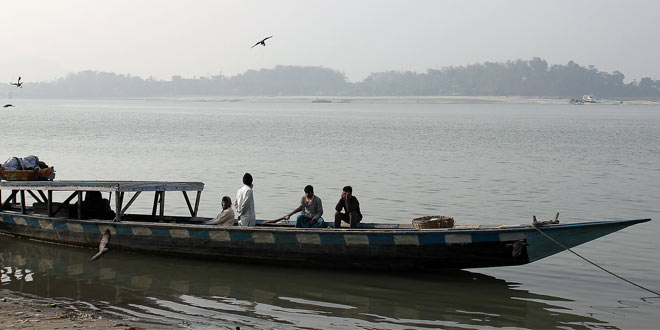 Guwahati: The water of the Brahmaputra river in Assam has turned muddy and has changed its colour. Assam Health Minister Himanta Biswa Sarma suspects that the construction of a dam or some accident in China has caused the Brahmaputra’s water in the state to have abnormal deviations- turning muddy and containing cement particles.

“Brahmaputra has suddenly become muddy. So we have tested few samples in Tezpur (District Level Laboratory of the Tezpur Division of the Public Health Engineering Department). The sample show the water containing a lot of mineral properties.

And people are also saying there is a lot of cement which has now mixed with the water, Mr Sarma told reporters on the sidelines of a meeting here on December 6.

The river enters India after flowing through the Tibetan plateau as Yarlung Tsangpo. It flows through Arunachal Pradesh for about 230 km as Siang river to reach Pasighat and then joins the Lohit and the Dibang to form the Brahmaputra river in Assam.

The Brahmaputra’s water turning muddy and change in the colour for over a week now in the winter season has caused concern among people and authorities in the state.

Assam Pollution Control Board Member Secretary B K Barua said samples of the water of Brahmaputra is “abnormally turbid” and samples have been collected in Guwahati, Dibrugarh and Tezpur for drawing a definitive conclusion after tests.

Meanwhile, the State Water Resources Department has decided to send letters to the Union Ministry of Water Resources (MoWR) to take up the Siang/Brahmaputra-related matters with the Chinese government along with hydro meteorological data of the major rivers of Assam. The water of the Siang river in Arunachal Pradesh, which has turned dark and muddy, has become unfit for human consumption, the State Water Quality Testing Laboratory (SWQTL) has said in a report.

The report stated that the Nephelometric Turbidity Unit (NTU) content of the water sample was 482, while the iron content was recorded at 1.65 mg/litre, which was beyond the permissible limits.

Will Bring The Next Odd-Even Without Exemptions: Delhi Government

As Cricketers Vomit On The Field, Indian Medical Association Writes A Letter To BCCI