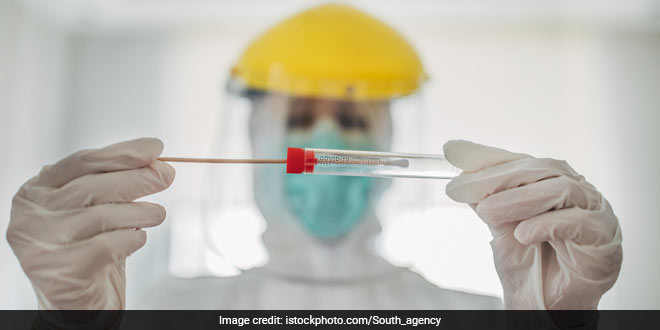 New Delhi: “When will you come home?” the daughters of Doctor Ajit Jain would ask when they used to talk over phone late at night. The nodal officer for novel coronavirus at the Rajiv Gandhi Super Specialty Hospital in Delhi has not been home for over five months. Duty and fear of spreading the infection among the family members kept him away. When he finally came home, 13 kilometres away in Kamla Nagar and just a half-an-hour drive from his hospital in Dilshad Garden, his two daughters opened the door and hugged him tight. Dr Jain’s wife, trying not to be overwhelmed with emotion, performed an ‘aarti’ and applied a ’tilak’ on his forehead, as his son shot a video of the homecoming — the first time since March 17. A cake was cut and the family dined together in almost six months.

When cases started emerging in March, we understood COVID-19 is one of the biggest challenges mankind has ever confronted, Dr Jain, who availed his first leave on Thursday after working for 170 days on the trot, told PTI.

“Initially, I didn’t go home for the fear of spreading the infection in my family,” the 52-year-old said.

Both my parents are aged above 75. I was worried about them. I didn’t want to put their lives in jeopardy.

As the number of patients swelled, it seemed impossible to talk to the family on the phone, too.

“Saving lives was the first priority. There was so much going on,” he says. “I could talk to my family only at night, around 1 or 2 am.”

Dr Jain’s daughter, Aarushi Jain, says the family was really worried for him as the cases kept piling up.

We would ask him ‘papa when will you come home?’ We saw what happened in Italy, in the US… we were freaking out. So many doctors who contracted the virus are no more among us, she says.

“We would wait up till 2 am to talk to him for five minutes, to enquire about his well-being,” the daughter says.

His son, Amitabh Jain, says he cannot explain how it feels when children cannot see their father around. “I wrote my JEE exam on September 2 (Wednesday). I cannot tell you how badly I wished if papa could take me to the test centre,” he says.

Though the government made arrangements for the health staff to stay at the Leela Ambience hotel, the doctor spent several nights in the hospital itself. For the initial three months, not once did Jain sleep for 15 minutes in a stretch. His phone just won’t stop ringing. The doctor has given his personal mobile number to all coronavirus patients who are undergoing treatment or have been discharged from the hospital after recovery.

The situation was more serious during the lockdown. Patients were more anxious living in closed rooms. They would call after every five minutes… No one could even imagine the entire country would shut down, he says.

Also Read: This Delhi-Based NGO Is Reaching Out To The Marginalised Communities,  Provides COVID-19 Relief To The Transgenders in Delhi

Talking to the patient personally builds confidence among them and reduces their anxiety and stress, he says. The doctor also formed a team — including a nurse, nursing orderly and housekeeping staff — that would talk daily to the patients admitted in the hospital on general things so that they do not feel lonely. Separate teams have been created to call up those who have recovered from the virus to know about their well-being.

“After the patient is discharged, the team calls up him/her to take feedback,” the doctor says. “This is how we got to know that a few recovered patients were suffering from long-term complications like anxiety, breathlessness, insomnia.”

The feedback led to the opening of a post-COVID clinic, a first-of-its-kind facility, on the premises of the hospital with medical specialists to treat symptoms particular to their respective fields. The doctor has also created WhatsApp groups and is in “regular touch” with all more than 1,500 patients.

“They or their family members call me up directly if they want to discuss something,” Dr Jain says. “Sometimes, people give us blessings. Sometimes, they say bad things about us… I am just doing my job.”

With ‘Do Not Sit Here’ Stickers, No Cash Transactions Delhi Metro Services Resume With Strict Protocols