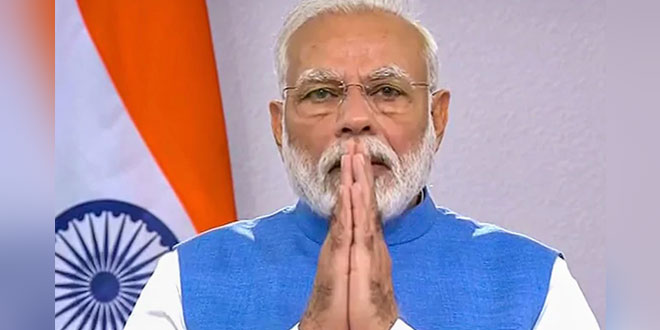 New Delhi: Prime Minister Narendra Modi announced on Monday (January 11) that the central government will bear the expenses of vaccinating nearly three crore healthcare and frontline workers in the first round and suggested that public representatives, a reference to politicians, should not be part of this initial exercise. Interacting with state chief ministers, PM Modi underscored the enormity of what he described as the world’s biggest vaccination exercise, which begins from January 16, saying over 30 crore citizens will get the jabs in the next few months in India against only 2.5 crore people vaccinated so far in over 50 countries in around a month.

The two already approved made-in-India COVID-19 vaccines are more cost-effective than any other in the world and have been developed as per the country’s needs, he said at the meeting held over video conference to discuss the COVID-19 situation and the vaccination roll-out. Besides the two vaccines — Covishield developed by Oxford and British-Swedish company AstraZeneca and manufactured by Serum Institute of India, and Bharat Biotech’s Covaxin, four others are under development, PM Modi said, asserting that India’s fight against the pandemic will enter a decisive stage with the vaccination roll-out. More vaccines may be available when the exercise moves into the second round, he added.

The prime minister also sought to dispel concerns expressed by some opposition leaders and experts over the approval given to Covaxin without the availability of efficacy data, asserting that scientists have taken all precautions to provide citizens with effective vaccines. The prime minister said he has been maintaining from the beginning that the scientific community will have the final word on the issue. India’s drug regulator has given nod to Covishield and Covaxin for the emergency use authorisation.

It is a matter of pride that both the vaccines are ‘made in India’, he said, adding that it can be imagined how much hardship India would have faced if it had to depend on foreign vaccines. Noting that the first round of vaccination is meant for healthcare and frontline workers, he said,

This is my personal suggestion and no one should take it otherwise. We public representatives are not part of it.

In some countries, including the US and Israel, leading public figures have taken the jabs while top functionaries in a few others have chosen to follow the standard protocol and wait for their turn. Talking about the COVID-19 situation in India, PM Modi said the country is in a much better place than many others in terms of the pandemic’s spread, and added that this is a matter of happiness but should not induce carelessness.

The panic visible among the people six-eight months back is no longer there, and the increasing confidence among them in the fight against the pandemic has had a positive impact on economic activities as well, the prime minister said. PM Modi also asked states to ensure that rumours do not get spread about the vaccination exercise and suggested involving social and religious groups in helping check any rumour-mongering.

On Saturday (January 9) last week, PM Modi had reviewed the status of COVID-19 and vaccine preparedness across states and union territories at a high-level meeting where. He said many states have given good suggestions in fighting the pandemic and the dialogue and cooperation between the Centre and states have been a “great example” of federalism.

After healthcare and frontline workers totalling about three crores, priority will be given to those above 50 years of age and the under-50 population groups with co-morbidities, together numbering around 27 crore, in the next phase.

According to the Health Ministry guidelines on COVID-19 vaccination, the latest electoral roll for Lok Sabha and Legislative Assembly elections will be used to identify the population aged 50 years or more. At least seven other vaccines are being developed in India, while some others can be imported from abroad, including the one developed by global pharma giant Pfizer which has already applied for import and sale in India of its vaccine for emergency use authorisation.

India’s total active caseload has fallen to 2.25 lakh, which accounts for just 2.13 per cent of the total number of coronavirus cases in the country at over 1.04 crore, according to the latest Health Ministry data. More than 1.5 lakh have died so far. However, the spread of the virus has lessened in a big way in the country as the daily number of new cases has dropped to about 16,000 from a peak of almost 98,000 in September last year.

However, the overall caseload for India is the second-highest in the world after the US, which has reported more than 2 crore cases so far — almost double of India’s cumulative tally. In terms of deaths also, the US has recorded the most at nearly 3.7 lakh, followed by over 2 lakh in Brazil and about 1.5 lakh in India. However, India tops the global charts for recovery with more than 1 crore having recuperated after contracting the deadly virus.

Many countries have launched mass vaccination programmes to protect their people from the deadly virus, which was first detected in China in December 2019 and has killed nearly 20 lakh people globally and infected over 9 crore since then. The vaccination drive in India is starting almost a year after the first case was reported on January 30, 2020 in Kerala, though a wider outbreak began in March when a few people in Delhi and adjoining areas tested positive after returning from abroad.

This also led to British Prime Minister Boris Johnson cancelling his visit to India for being the chief guest for Republic Day parade on January 26. In his interaction with chief ministers, PM Modi also invoked former prime minister Lal Bahadur Shastri, whose death anniversary was observed on Monday, noting that he had said in 1965 that the basic idea of governance is to hold society together so that it can develop and march towards certain goals.
The work of the government is facilitating this, PM Modi said quoting former PM Shashtri and added that the Centre and states have followed this precept in the fight against the coronavirus which was a matter of “satisfaction” for him.

PM Modi said India’s vast experience with vaccination will prove handy in this endeavour and asserted that the priority list has been decided as per the advice of experts and scientific community after consultation with states. Healthcare workers from both government and private sectors will be the first ones to receive the vaccine.

Along with them, sanitation workers, police and paramilitary personnel, home guards, disaster management volunteers and other jawans in civil defence and revenue officials associated with containment and surveillance will also receive the vaccine in the first phase.

The total number of such personnel is around three crore, he said. PM Modi told chief ministers that our new preparations and SOPs have to be linked up with our old experiences of running universal immunization programmes and conducting elections throughout the country. He noted that the booth level strategy used for elections needs to be used here as well.

He said the most important factor in this vaccination drive is the identification and monitoring of those who need to be vaccinated. For this, Co-Win digital platform has been created, he said, adding that beneficiaries will be identified with the help of Aadhaar and timely second dosage for them will also be ensured. After a person receives the first dose of vaccination, Co-Win will immediately generate a digital vaccination certificate. This certificate will also act as a reminder for the second dose, after which, a final certificate will be given, he said.

Over 1,100 Mock Vaccines Administered For COVID-19 In Second Dry Run In Noida