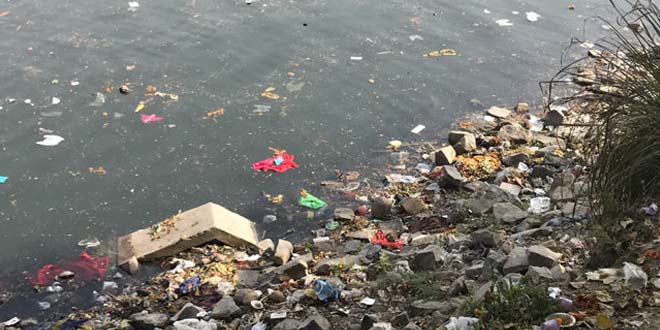 The National Green Tribunal (NGT) on Friday banned open defecation and dumping of waste on Yamuna floodplains, announcing a penalty of Rs. 5,000 on whoever violated the order. The order comes as a relief for the river, which was bestowed with a human entity status earlier in March this year. Yamuna, which is considered to be among one of the most polluted rivers in the world is plagued by indiscriminate dumping of human and industrial waste, with Delhi accounting for 70 per cent of the pollution.

The panel noted that the two sewage treatment plants (STPs) at Delhi Gate and Najafgarh would treat 67 per cent of the polluted water reaching Yamuna. 14 sewage treatment projects are to be constructed in Delhi, of which 7 will be built by the Delhi Jal Board utilising its own funds. Earlier on May 1, NGT had ordered the inspection of sewage treatment plants at Delhi Gate and Okhla to ensure that wastewater was properly treated before being released into the Yamuna. A report has been sought regarding the functioning and effectiveness of these plants. The panel also directed the formation of a committee comprising Delhi Jal Board’s CEO, Chief Engineer of DDA and members of National Mission for Clean Ganga (NMCG) for cleaning Yamuna.

The order is a welcome one for us who have been fighting the Yamuna cause for many years. We often encounter people defecating in the open and the local police reluctant to do anything about it. The imposition of a fine will ensure that people are discouraged to defecate along the Yamuna’s banks, said Brij Khandelwal, Environmentalist.

The order also directed the municipal bodies of Delhi and the Delhi government to ensure that strict action is taken against industries which operate in residential areas. But considering the history of the civic bodies’ performance in the case of Yamuna, not the judgement, but the implementation will be the tricky part.

The Delhi Government had earlier imposed a fine of a similar amount. There have been various judgments on the Yamuna before today’s NGT order. It is the implementation that will be tricky as MCD, Delhi Jal Board and the Delhi government need to work together for the river’s revival. We have seen earlier that the implementation is poor and a big portion of the pollutants being dumped in Yamuna come from domestic sewage. The Yamuna pollution issue can only be tackled when all the civic bodies have a proper plan of implementation, said Sushmita Sengupta, Programme Manager, Centre for Science and Environment.

The civic bodies’ continuous run-ins with each other hasn’t fared well for the Yamuna. The continuous shrugging of responsibility even tested the patience of the Supreme Court in 2012, which termed MCD as the biggest polluter of the river. The Municipal Corporation of Delhi’s continuous failure to monitor industries as well as domestic sewage has resulted in Yamuna being in a continuously polluted state. The fact that 20 of Delhi’s 30 STPs run under capacity hasn’t helped either. Despite the existence of Swachh Bharat Abhiyan for more than two years, the civic bodies’ inability to construct public toilets in abundance due to lack of utilisation of funds has also resulted in the continuance of open defecation along Yamuna, resulting in ongoing pollution of the river.

The division of civic duties between the three municipal bodies often leads to bureaucratic delays. The order can only be implemented when we have the requisite funds to build more toilets along the habitations near Yamuna. By doing so, the flow of domestic sewage in the Yamuna can be controlled to some extent, said P.K. Gupta, Commissioner, North Delhi Municipal Corporation.

To tackle the flow of waste into Yamuna, the Delhi Jal Board has already begun work on constructing interceptor sewers which could see a 60 per cent reduction in the flow of pollutants in Yamuna. These sewers will intercept the smaller sewers and block them from meeting the main drains and channelise it to the nearest sewage treatment plant. The Board also plants to build 7 new STPs within the next 3 to 5 years to increase the city’s sewage treatment capacity, which is currently at 604 million gallons of sewage per day.

It remains to be seen how effective the NGT order turns out to be. The order is applicable for civic bodies, the Delhi government, the Delhi Jal Board and even law enforcement that will be in charge of ensuring that defecation and dumping of waste along the river are deftly dealt with. The order will ask for utmost cooperation between all the government departments which should quickly formulate a common plan to ensure effective implementation of the NGT order.