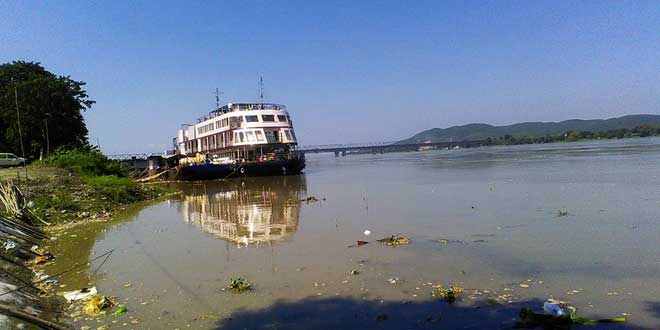 Itanagar: Arunachal Pradesh Chief Minister Pema Khandu has expressed concern over the high content of Nephelometric Turbidity Unit (NTU) in the Siang river in the state and said his government was in constant touch with the Centre so that New Delhi could take up the issue with China. The Siang river, which flows as Yarlung Tsangpo from southern Tibet, becomes the Brahmaputra river in Assam. Minsiter Khandu is also likely to meet Home Minister Rajnath Singh over the issue.

Talking to reporters at Pasighat Advance Landing Ground on December 3, Minsiter Khandu said his government has taken up the issue of sudden change in water quality of the Siang river and high content of NTU in the water causing death of aquatic lives and even livestock in the state.

The chief minister was apprised of the situation at Pasighat by the Disaster Management Parliamentary Secretary Kaling Moyong, who is also the local MLA, Lok Sabha MP Ninong Ering and deputy commissioner Tamiyo Tatak.

Mr Ering had recently written to Prime Minister Narendra Modi with a request to take up with the Chinese government regarding sudden change in water quality of the Siang river.

The deputy commissioner briefed Minsiter Khandu about the current situation of the river flow where NTU was found to be very high to the extent of 425 and said that if exposed for a long period it might affect aquatic lives.

Based on water sample collected on November 27, the report said that NTU caused by concentration of suspended or dissolved particulate materials in the river water is 425 NTU, whereas the permissible range is 0-5 NTU.

The report also confirmed higher degree of iron content in the river waters, 10 PPM (particles/million), against the permissible limit of just 0.1 to 2 PPM.

The same sample will be sent to the State Water Testing Laboratory in Itanagar.

The sample has been sent to the North East Regional Institute of Science and Technology in Nirjuli for further studies.

Also Read: Once Assam’s Lifeline, The Brahmaputra River Today Is Struggling with Oil Pollution and Waste Disposal Which Are Gradually Rendering It Lifeless