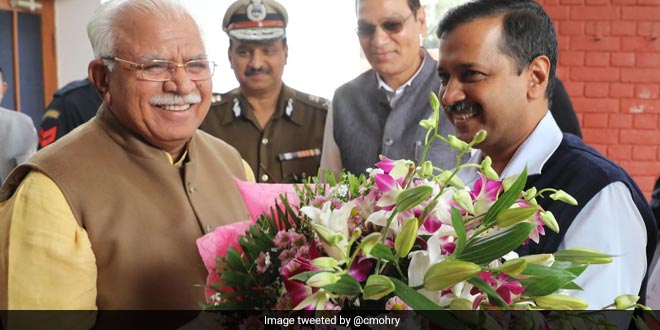 Chandigarh: Chief Ministers Manohar Lal Khattar of Haryana and Arvind Kejriwal of Delhi on Wednesday met for nearly 90 minutes here and agreed to take steps to prevent a repeat of smog in the National Capital Region (NCR) next year.

“We … are happy to have had a very fruitful meeting at Chandigarh. We recognise our deep and shared concern over the recent episode of heavy smog in our NCR. We agreed upon the need for action on many measures aimed at preventing its re-occurrence in the winter of 2018,” a joint statement said.

“During discussions, we agreed that the serious health risk to which such episodes of smog expose one and all require concrete and quick action on a number of fronts.

“We covered crop residue burning and vehicular pollution issues. We resolve to put in sustained efforts in pursuance of the jointly identified action points in the coming days, weeks and months,” the statement added.

We look forward to covering other sources of air and water pollution in our future discussions, it said.

Speaking to the media after his meeting with Chief Ministers Khattar, Kejriwal said: “We cannot control the direction of the wind. We all will have to make efforts to control air pollution.”

Chief Minister Kejriwal, who had earlier blamed farmers of Punjab and Haryana for causing smoke and air pollution in Delhi, avoided blaming anyone.

Chief Minister Khattar said: We have discussed a number of steps that can be taken to ease air pollution.

Both Chief Ministers did not take any question from the media.

Chief Minister Kejriwal was earlier greeted by protests by activists of the Shiromani Akali Dal and Congress when he reached the Chandigarh airport.

He had earlier written to the Chief Ministers of both Haryana and Punjab and sought a joint meeting to find a solution to the problem that has led to widespread health concerns in the NCR.

But on Tuesday, Punjab Chief Minister Amarinder Singh rejected Chief Minister Kejriwal’s request and instead asked him to refrain from trying to politicise a serious issue.

Also Read: Straight From Experts, How Pollution Is Affecting Our Health And Life