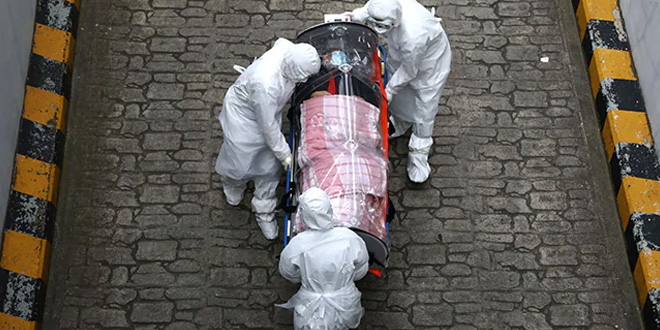 Washington DC: A comprehensive breakdown of the initial developments pertaining to the novel coronavirus outbreak highlights how the pandemic — which has presently killed more than 14,500 people across the globe — could have been contained in the initial phase were it not for the Chinese government’s initial coverup on the outbreak. As early as the second week of December, Wuhan doctors were finding cases that indicated the virus was spreading from one human to another, as per the detailed timeline shared in a report by American magazine National Review.

Also Read: Coronavirus 2019: Make Healthy Eating And Nutrition A Part Of Your Life And Boost Immunity

On December 25, Chinese medical staff in two hospitals in Hubei’s capital Wuhan were found to be the suspected cases of virus pneumonia and are subsequently quarantine — a further evidence of human-to-human transmission of the then mysterious virus. Despite this, six days later, the Wuhan Municipal Health Commission declared their investigation had found no obvious human-to-human transmission.

A day prior, Chinese doctor Li Wenliang warned a group of doctors of the possible outbreak of an illness that resembled Severe Acute Respiratory Syndrome (SARS) — a fatal respiratory illness caused by a different strain of coronavirus. Li was tested positive for coronavirus on February 1 and died six days later.

A month prior to being tested positive, Li had been accused by the Wuhan Public Security Bureau of “spreading rumors”. On January 3, the doctor signed a statement at a police station, acknowledging his “misdemeanor” and promising not to commit further “unlawful acts,” the National Review writes in its report.

On the day that the doctor signed the statement, China’s National Health Commission ordered institutions not to publish any information related to the unknown disease. Furthermore, it ordered labs to transfer any samples they had to designated testing institutions or to destroy them.

On January 3, Wuhan Municipal Health Commission released another statement declaring their investigation had still found no clear evidence of human-to-human transfer. The statement was reiterated two days later, even though the number of cases in the city had spiked.

As per a January 6 report by the New York Times, as many as 59 cases of the “pneumonia-like illness” — as it was deemed back then — had been reported in Wuhan already. On the same day, the Chinese Center for Disease Control and Prevention issued a level 1 travel watch.

The first case of novel coronavirus outside of China was reported in Thailand on January 13, involving a 61-year-old Chinese woman, who had a travel history to Wuhan but had never visited the city seafood market.

Preliminary investigations conducted by the Chinese authorities have found no clear evidence of human-to-human transmission of the novel coronavirus (2019-nCoV) identified in Wuhan, China.

On January 15, Japan reported its first case of the novel coronavirus, involving a person who had not visited any seafood markets in China. A statement issued by Japan’s Health Ministry said that it was possible that “patient had close contact with an unknown patient with lung inflammation while in China.”

It was on the same day that the Wuhan Municipal Health Commission said in a statement that the possibility of limited human-to-human transmission could not be ruled out. Four days later on January 19, the World Health Organisation carried out a statement stating,

Not enough is known to draw definitive conclusions about how it is transmitted, the clinical features of the disease, the extent to which it has spread, or its source, which remains unknown.

Till now, the virus has spread to 189 countries or territories, infecting more than 334,000 people and claiming lives of more than 14,500, as per the latest data available on the World Health Organisation website.

COVID-19: Make Healthy Eating And Nutrition A Part Of Your Life And Boost Immunity