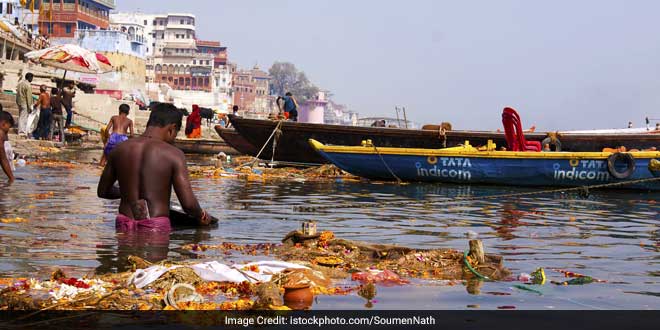 New Delhi: In a bid to ensure that there is uninterrupted flow of water in the Ganga River, the National Green Tribunal asked the Centre today to clear its stand on minimum environmental flow (E-flow) in the river. The apex environment watchdog said that unless excessive extraction of water and discharge of high pollutants are controlled, it will be difficult to restore the Ganga to its original pristine condition.

Environmental flow describe the quantity, timing, and quality of water flows required to sustain freshwater and estuarine ecosystems and the human livelihoods and well-being that depend on these ecosystems.

A bench headed by NGT Chairperson Justice Swatanter Kumar directed the Environment Ministry, Ministry of Water Resources (MoWR) and the Central Pollution Control Board to provide complete and correct information on environmental flow to be maintained in the river.

The green panel also asked them to appraise it about extraction of groundwater in this stretch, spanning a distance of 543 km between Haridwar and Unnao, and state whether the water being diverted into the various Ganga Canals should be regulated so as to help maintenance of minimum flow of the river.

The Ministry of Environment and Forests, Ministry of Water Resources and the CPCB will take a clear stand as to what should be the minimum environmental flow of the river Ganga in Segment-B (Haridwar and Unnao), the bench said.

The NGT has now fixed the matter for hearing on April 19.

Earlier, the Yogi Adityanath-led Uttar Pradesh government had favoured the shifting of British-era tanneries releasing toxic wastes into the river Ganga at Kanpur.

The UP government had told the National Green Tribunal that hunt for a new site for setting up these leather units, which are the “major source of pollution” in the Ganga, is under consideration and would be identified soon.

Last year, the then Akhilesh Yadav government had opposed the idea of shifting of over 400 tanneries giving employment to over two million people, saying the moving the tannery hubs to some other places was almost “next to impossible” due to the paucity of land.

In a detailed report covering various aspects of contamination in the river, the CPCB had informed the NGT that the Ganga, spanning a distance of 543 km between Haridwar and Kanpur, was affected by 1,072 seriously polluting industries which were releasing heavy metals and pesticides.

At present, 823.1 million litres per day (MLD) of untreated sewage and 212.42 MLD of industrial effluent flows into the river, while three of the four monitored sewage treatment plants were non-compliant with the set standards, it said.

Over 1 Crore Households In Urban India Without Toilets: Ministry Of Housing And Urban Poverty Alleviation