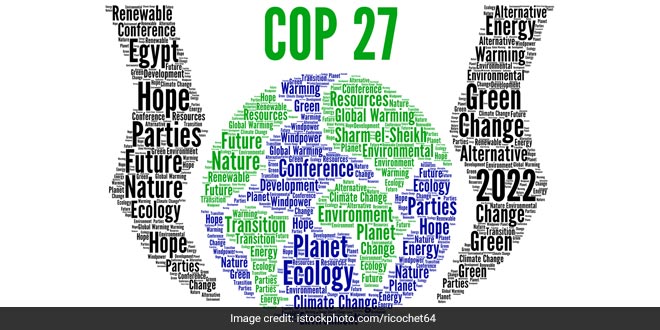 Only 24 of the nearly 200 countries attending the COP27 talks have submitted new or updated emissions-cutting plans since last year's U.N. climate conference in Glasgow, Scotland

New Delhi: An international climate summit starting next week in Egypt will test the resolve of nations to combat global warming, even as many of the biggest players are distracted by urgent crises ranging from war in Europe to rampant consumer inflation. More than 30,000 delegates, including representatives from some 200 countries, will gather on November 6-18 in the seaside resort town of Sharm el-Sheikh to hash out details around how to slow climate change and help those already feeling its impacts.

But with nations dealing with the fallout of Russia’s invasion of Ukraine, along with soaring food and fuel prices and stuttering economic growth, questions loom over whether they will act quickly and ambitiously enough to avoid the worst effects of climate change.

The chill in relations this year between top greenhouse gas emitters China and the United States does not bode well, experts say. A United Nations report released last week showed most countries are lagging on their existing commitments to cut carbon output, with global greenhouse gas emissions on track to rise 10.6% by 2030 compared with 2010 levels.

Scientists say emissions must drop 43 per cent by that time to limit global warming to 1.5 degrees Celsius (2.7 degrees Fahrenheit) above pre-industrial temperatures – the threshold above which climate change risks spinning out of control.

Only 24 of the nearly 200 countries attending the COP27 talks have submitted new or updated emissions-cutting plans since last year’s U.N. climate conference in Glasgow, Scotland, even though all had committed to doing so, according to the U.N. climate agency.

A few countries, including Chile, Mexico and Turkey, are expected to release new plans during the Egypt conference, but it is unclear if any major developing economies like China and India will be among them.

The chance for China to make another major move ahead of COP27 is low, said Li Shuo, a China climate expert at environmental group Greenpeace, who is familiar with the government’s thinking.

Alden Meyer, international climate policy expert at E3G, said the fraying of diplomatic ties between Washington and Beijing over issues including Taiwan and the war in Ukraine were a headwind for global climate progress, noting past collaboration between the two had helped boost climate talks.

Is it possible to make progress without the U.S. and China collaborating? Yes, it is, but it’s not easier, he said.

The administration of U.S. President Joe Biden, meanwhile, has been urging U.S. and international oil and gas drillers to ramp up production to address tight global markets, lower consumer prices and offset supply disruptions linked to Russia’s war on Ukraine – showing how the energy crunch has changed the policy priorities of a president who had campaigned on a promise to quickly put an end to the fossil fuel era.

The U.S. delegation to the U.N. conference is likely to tout Biden’s legislative victories on climate change, including passage of the Inflation Reduction Act, which included billions of dollars in subsidies for wind and solar power and electric vehicles.

The two-week U.N. negotiations in Egypt follow a year of wild weather disruptions around the world, as global warming takes a toll – from the devastating floods in Pakistan, South Africa and Nigeria, to heatwaves in the Arctic and across Europe and record-setting droughts in the American West and France.

The talks are likely to address how these and other nations affected by climate change could be compensated by rich countries believed to have caused it. Other topics will include how international financial institutions like the World Bank could be reformed to speed the transition away from fossil fuels.

The issue of mobilizing new funding to compensate for climate-driven destruction is a contentious one, with rich nations, including the United States and European Union members, having opposed past proposals for a “loss and damage” fund over concerns about their liabilities.

U.S. Special Envoy on Climate Change John Kerry said last week the United States supports a serious dialogue on the topic at COP27, but said the issue was tricky given upcoming Congressional elections that could swing the legislative body toward Republican control.

He also pointed out that the United States is the biggest donor of global humanitarian aid and will focus on ramping up spending on climate adaptation. That message rings hollow for some.

I don’t want to hear political rhetoric about loss and damage. I don’t want to hear what countries are already doing in terms of disaster relief, because it’s not enough, said Aminath Shauna, climate minister for the Maldives, a low-lying Indian Ocean island chain facing future inundation with sea-level rise.

The talks received a boost from Brazil’s election on Sunday of leftist leader Luiz Inacio Lula da Silva, whose team has decried deforestation while calling for an international summit on the fate of the Amazon.

The talks could also highlight natural gas, given its importance to the host continent. African nations with petroleum riches argue they have a right to develop their resources, especially as Europe is scrambling to find new suppliers to replace Russia.

African nations are going to call out the hypocrisy of Europe securing gas deals in the name of energy security while telling African nations not to develop their resources for baseload energy, said Lily Odarno, director of the Clean Air Task Force’s Africa climate program.

Egypt’s lead climate negotiator, Mohamed Nasr, has said the summit’s success would be measured by whether countries deliver a package of agreements that keep the goal of limiting global warming to 1.5C alive, while ensuring poorer nations are treated fairly and receive the support that rich countries have promised.

Climate change is not giving us any space to breathe,” Nasr said. “Science is telling us we are not on track on anything.