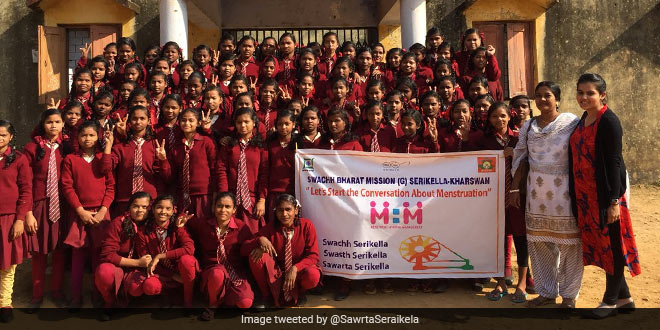 New Delhi: Santoshi, a 55-year-old woman lived in a remote district of Jharkhand – Seraikela-Kharsawan. Like thousands of women in India, she used rags for managing her menstrual blood. Usually, Santoshi used to wash and dry the soaked rag under a tree during her menstruating days. One fine day, a harmful insect settled on her rag when she was drying it for reuse purpose. Without noticing the insect, she used the rag the next day and unfortunately the insect entered her body. Few days later, she suffered from severe stomach ache and died in the hospital. Santoshi was not alone who died in this sad way, there are many in India who suffer the same fate. In order to change this grim reality, Seraikela-Kharsawan district in Jharkhand has initiated a campaign called – ‘Let’s start the conversation about menstruation’. Through the campaign, the district aims to address the issue of menstrual hygiene and menstrual waste management.

The campaign is being led by the Deputy Development Commissioner of the district and is catering all the students of nine Kasturba Gandhi Vidyalaya in the district in the 1st phase. Around 20 thousands girls are being benefited through this campaign.

This campaign aims to educate the girls on menstrual hygiene and guides them on why they need to know about safe disposal practices of their menstrual waste. On regular basis, we are holding orientation workshops in school for girls. Via video screenings and lectures we are making students aware of the concept of menstruation and the issues associated with it.

He also added that given that in India approximately 70% of the girls do not have adequate knowledge about safe disposal of sanitary pads, the campaign will create demand for sanitary incinerators that will help in safe disposal of menstrual waste.

We will start installing the sanitary napkin incinerators in all the residential schools where a lot of menstrual waste is generated in the second phase of the campaign. For now, we are aiming for education and awareness.

Statistics show India produces over 1 billion non-compostable sanitary pads every month which goes into country’s already overfilled and dying landfills. In order to overcome this humongous amount of untreated waste, the district aims to educate the girls about safe disposal practices and create a demand for sanitary napkins incinators.

Taking A Step Ahead

Special Menstrual Hygiene Management notebooks have been designed in the district that is being distributed to girl students in the district so that they can stay away from the common myths related to menstruation in India.

Mostly girls in India are treated without dignity and are called impure during their menstruating days. Through the campaign we want to make the girls understand that menstruation is a natural phenomena and they deserve not to be treated in a bad way just because they menstruating. We want to start the menstruation conversation, there is nothing in it to be hidden from the world. We are also motivating girls to ask us question or query related to menstruation and the process, added the officer.

According to the National Family Health Survey-4, only 39.9 per cent women in the rural areas of the state use sanitary napkins during their menstruating days. Education and lack of awareness is the cause for such low and grim statistics. In a bid to change the situation, the local civic body has come up with the much needed campaign in the sate – Let’s start the conversation about menstruation.

Swachh Year-Ender 2017: Menstrual Hygiene, A Cause That Found Many Voices Of Support, Some Progress Made But Even Bigger Challenges Remain