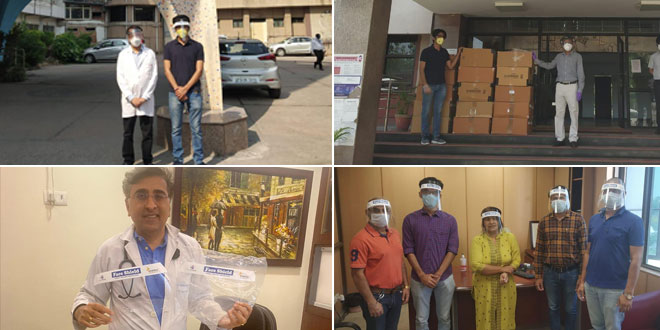 New Delhi: With an aim to help the frontline warriors of COVID-19 pandemic, students of the Indian Institute of Technology (IIT)-Delhi have come together and launched a campaign ‘Together We Care’. Under the campaign, the students have taken up the manufacturing and distribution of face shields for healthcare workers, policemen, and sanitation workers and deliver them to various hospitals across the country free of cost. As of now, the campaign has distributed 13,000 face shields across the country.

Also Read: Free Meals In Delhi Slums: A Woman Who Feeds Poor With Her Own Money

While talking about the initiative, Ritika Chaplot, a student from IIT-Delhi said that the campaign is being initiated by Enactus, student community of IIT Delhi which aims to solve current social problems through innovations and entrepreneurship. She said,

Hospitals, police forces and sanitation workers in India face an extreme shortage of Personal Protective Equipment (PPEs). Therefore, on April 29, we started a campaign to manufacture and distribute face shields for frontline workers. The target is to distribute 1 lakh face shields.

Another student Chaitanya Srivastava, a member of Enactus said that the campaign is producing effective and low-cost face shields which have been tried and tested by doctors at AIIMS (All India Institute of Medical Sciences). He said,

After developing some prototypes ourselves, we trained some manufacturers in Delhi to produce these face shields on a bulk scale and established collaborations for distribution of same. For the sustainability of this campaign, we rely on funds from corporations and individuals donating in our crowdfunding campaign. The face shields are being produced at a cost of Rs. 30 per piece.

The students’ initiative has been able to raise Rs. 4.6 lakh through crowdfunding for producing low-cost face shield and distributing the same. In Delhi, Enactus has provided face shields to seven hospitals including AIIMS, Lady Hardinge Medical College among others. The group has also collaborated with Sleepwell foundation to provide shields to East Delhi Police as well. In Kolkata, the group has distributed 3000 of these face shields to a number of frontline workers.

Also Read: Delhi In Lockdown 4.0: Here’s What You Can And Can’t Do

We appreciate Enactus, IIT-Delhi for contributing to the safety of our personnel by donating 1,000 specially designed face shields during this time of crisis. #ProtectionIsMust #IndiaFightsCOVID19

Apart from this, the ‘Together We Care’ campaign is also working on developing a mobile application to support and provide mental well-being to women suffering due to the current lockdown. It is also working on building a sterilization device to sterilise currency notes and a hand-held device to reduce contact with objects while moving around in a post-COVID-19  world.